Stimulus, Episode IV, A New Hope. Plus, say no to Cuomo, and Wall Street comes to Washington. 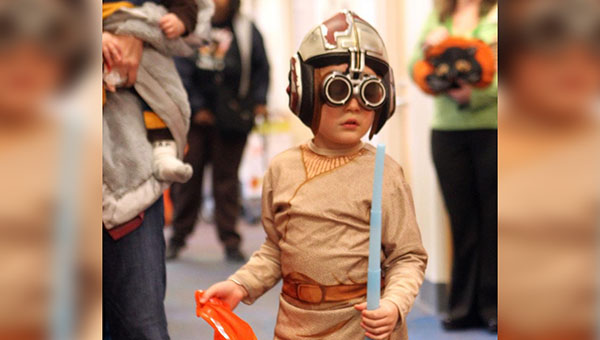 A long time ago, in a galaxy far, far away, Democrats were good at politics. (LAURIE SKRIVAN/ST. LOUIS POST DISPATCH/AP PHOTO)

With President Trump extending his guidelines for social distancing to the end of April, and the expectation that will need to be extended again given the unchecked nature of the virus throughout much of the country, talk has turned to another economic survival and rescue package, on top of the two smaller relief bills and the $2.2 trillion monster passed last week. Well, at least, talk has turned within one caucus.

That would be House Democrats, who now want to bargain over all the things Republicans rejected in the first three bills. On a conference call yesterday, House Speaker Nancy Pelosi said her caucus was “taking inventory” on what the public needed, throwing out ideas like a surge of funds for hospitals for personal protective equipment and coronavirus testing, full paid medical leave, more state and local government aid, assistance for overburdened pension funds, guaranteed free treatment of COVID-19 cases for everyone, an OSHA emergency temporary standard to mandate safety rules in workplaces kept open through the crisis, and longer-term goals like a buildout of broadband to secure access to telehealth.

Pelosi has also talked about more direct payments to individuals, and even lifting the state and local tax deduction cap from the Trump tax cuts, something that specifically targets high-income earners in blue states, as a stimulus measure (a spokesperson for Pelosi said this would be “targeted” to the middle class, which is impossible unless there’s a giant section of the middle class that itemizes deductions—and there isn’t).

You’ll notice that all these ideas are coming from one side of the aisle. Republicans, you see, already secured their bailout for the powerful, and have no interest in what they’re sure to call a “partisan wish list.” Indeed, one White House economic adviser insisted to the Washington Post’s Jeffrey Stein, “No more spending. We did all the spending.” It’s amazing that Democrats had to re-learn this lesson. They gave up all their leverage in stimulus III. Maybe economic conditions will wither to the point that stimulus IV will become necessary, but that’s going to be well in the future for Republicans as long as their business base is satiated. The whole point of doing the bailout and the individual relief together was to maximize both. If you left a bunch of individual relief on the table, you did it wrong.

One Republican leader, House Energy and Commerce ranking member Greg Walden (R-OR), did make noise about a “next” virus response bill, but only to tout his pet surprise billing legislation, which was heading toward this timeline anyway. A series of temporary health-related tax extensions expire in May, which was intended to push lawmakers to deal with surprise billing and maybe drug prices. That was the plan at the end of last year, which I don’t really remember existing. Surely insurance companies and doctor groups will still want to fight it out over who can overcharge the public, but I wouldn’t call that a “virus response” bill, necessarily.

Meanwhile, big business is more concerned with bending the rules on the third stimulus than looking to a fourth. Lobbyists are trying to overrule a provision that limits companies with junk debt ratings from getting Federal Reserve loans. The Fed is already engaging in transactions beyond the bailout bill to assist real estate developers and ease up on bank regulations. Airlines had to agree to conditions not to lay off workers until September 30 and a couple big ones made immediate layoff plans for October 1; they’re now negotiating over what equity to give the government.

In other words, the bailouts are progressing in the realm where business is most comfortable: outside of Congress. They have no need to go back inside so workers can get paid sick leave. Without the leverage, I’d say stimulus IV is a long way off.

Another useful metric is hospitalizations, which have been spiking in places like California. This tracker estimates peak usage of hospital beds (seen as April 15) relative to those available, both regular and ICU units. It also includes ventilators needed. Right now, there’s a shortage on peak usage day of 54,046 beds, 13,856 ICU beds, and 26,381 ventilators. And April 15 is just two weeks away.

I suppose it was inevitable that the New York/D.C. media corridor, desperately seeking refuge from the Trump parade of inanities, would land on the authority figure closest to their homes to pour their hopes into. So here we are with Andrew Cuomo winning the hearts of MSNBC and CNN green rooms alike, mainly by getting loud at press events on TV. A recent poll shows that New Yorkers have rallied around Cuomo with 87 percent support, and the discarded West Wing scenarios envisioning a democracy-upsetting substitution at the Democratic National Convention are being furiously resurrected and rewritten.

Maybe it’s because of my allergy to cable news and relatively little exposure to Cuomo’s media blitz. But aside from yelling at the president to get him more stuff—which he’s right to do given the tragedy unfolding in New York City—I can’t say that he’s doing such a great job. As recently as March 6, Cuomo was reassuring New Yorkers, irresponsibly, that “we have far more people in the hospital from the flu than from COVID-19.” His slow-walk on emptying jails at risk of an outbreak has led to a predictable health catastrophe at Rikers Island, with over 300 inmates and staff already infected. Upstate prisoners are making hand sanitizer for 65 cents an hour, however, so maybe they can pilfer some of that and hope for the best. Cuomo’s also using the crisis as cover to reverse last year’s historic bail reform measures, which would add to the prison population during a crisis.

Amid a public health emergency, Cuomo is determined to make a crippling $2.5 billion in Medicaid cuts, including $400 million in trims to hospitals, based on a recommendation made months earlier and not revised after the crisis. Cutting Medicaid would leave New York on the outside of $6.7 billion in federal aid, but Cuomo has responded to that not by standing down but by saying “We can't do a budget without changes to Medicaid.” For the details, check out Akash Mehta’s report.

That state budget is due today, and if Cuomo gets his way, both Medicaid and education will take their lumps, part of “drastic” spending cuts while billions in potential taxes on the wealthy are left untapped. Meanwhile, Wall Street veterans have been put in charge of the economic recovery, appointments that intersect with Cuomo’s tax policy (he recently gave tax breaks to yachts and private planes). The poor and the vulnerable will be whacked with austerity at the worst possible time, and insisting on cuts to hospitals right now borders on the insane. But it certainly fits with Cuomo’s record of shielding the rich from any sacrifice.

For inattentive broadcast journalists to ignore these details and anoint Cuomo the latest in a long line of saviors delivering them from Trump is one thing. The influence of this love-fest on the public impression of his crisis performance is quite another.

Ridiculous D.C. Invite of the Week

Back before the world changed, I initiated a recurring feature on the website called the Ridiculous D.C. Invite of the Week, intending to highlight the weird events held in Washington all the time—Wells Fargo sponsoring an affordable housing panel, Facebook running a mixer to woo legislative staffers, AIG running a centennial party in a House hearing room.

Of course, Washington’s under a shelter-in-place order these days, and nobody’s venturing out to inexplicable events. But that doesn’t mean the invites stop: they’re just webinars now.

So it is for today’s 24th annual (!) Wall Street Comes to Washington Health Care Roundtable, sponsored by the Brookings Institution. In an acknowledgement that health care in America is mostly a financial play anyway, three stock analysts—from Morgan Stanley, Deutsche Bank, and the Bank of Montreal (BMO)—will “discuss market trends shaping the health care system and the impact of federal policies on health care companies.” In the current environment, that means three bankers betting on which private equity firm will have the cash to scoop up what remains of the health sector after the COVID-19 ringer (this is described more humbly in the description as “merger and acquisition trends”).

It’s a little jarring that this event comes down to financiers telling policymakers how health care will work over the next year, rather than the other way around. But ain’t that America.