There are only two seasons in the Abruzzi: summer and winter. The spring is snowy and windy like the winter, and the autumn is hot and clear like the summer. Summer starts in June and ends in November. The long days of sunshine on the low, parched hills, the yellow dust in the streets and the babies’ dysentery come to an end, and winter begins. People stop living in the streets: the barefoot children disappear from the church steps. In the region I am talking about almost all the men disappeared after the last crops were brought in: they went for work to Terni, Sulmona or Rome. Many bricklayers came from that area, and some of the houses were elegantly built; they were like small villas with terraces and little columns, and when you entered them you would be astonished to find large dark kitchens with hams hanging from the ceilings, and vast, dirty, empty rooms. In the kitchen a fire would be burning, and there were various kinds of fire: there were great fires of oak logs, fires of branches and leaves, fires of twigs picked up one by one in the street. It was easier to tell the rich from the poor by looking at the fires they burnt than by looking at the houses or at the people themselves, or at their clothes and shoes which were all more or less the same. 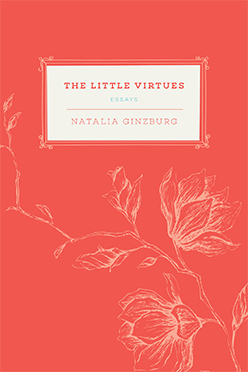 When I first arrived in that countryside all the faces looked the same to me, all the women—rich and poor, young and old—resembled one another. Almost all of them had toothless mouths: exhaustion and a wretched diet, the unremitting overwork of childbirth and breast feeding, mean that women lose their teeth there when they are thirty. But then, gradually, I began to distinguish Vincenzina from Secondina, Annunziata from Addolerata, and I began to go into their houses and warm myself at their various fires.

When the first snows began to fall a quiet sadness took hold of us. We were in exile: our city was a long way off, and so were books, friends, the various desultory events of a real existence. We lit our green stove with its long chimney that went through the ceiling: we gathered together in the room with the stove—there we cooked and ate, my husband wrote at the big oval table, the children covered the floor with toys. There was an eagle painted on the ceiling of the room, and I used to look at the eagle and think that was exile. Exile was the eagle, the murmur of the green stove, the vast, silent countryside and the motionless snow. At five o’clock the bell of the church of Santa Maria would ring and the women with their black shawls and red faces went to Benediction. Every evening my husband and I went for a walk: every evening we walked arm in arm, sinking our feet into the snow. The houses that ran alongside the street were lived in by people we knew and liked, and they all used to come to the door to greet us. Sometimes one would ask, ‘When will you go back to your own house?’ My husband answered, ‘When the war is over’. ‘And when will this war be over? You know everything and you’re a professor, when will it be over?’ They called my husband ‘the professor’ because they could not pronounce his name, and they came from a long way off to ask his advice on the most diverse things—the best season for having teeth out, the subsidies which the town-hall gave, and the different taxes and duties.

In winter when an old person died of pneumonia the bell of Santa Maria sounded the death knell and Domenico Orecchia, the joiner, made the coffin. A woman went mad and they took her to the lunatic asylum at Collemaggio, and this was the talk of the countryside for a while. She was a young, clean woman, the cleanest in the whole district; they said it was excessive cleanliness that had done it to her. Girl twins were born to Gigetto di Calcedonio who already had boy twins, and there was a row at the town-hall because the authorities did not want to give the family any help as they had quite a bit of land and an immense kitchen-garden. A neighbour spat in the eye of Rosa, the school caretaker, and she went about with her eye bandaged because she intended to pay back the insult. ‘The eye is a delicate thing, and spit is salty,’ she explained. And this was talked about for a while, until there was nothing else to say about it.

Every day homesickness grew in us. Sometimes it was even pleasant, like being in gentle slightly intoxicating company. Letters used to arrive from our city with news of marriages and deaths from which we were excluded. Sometimes our homesickness was sharp and bitter, and turned into hatred; then we hated Domenico Orecchia, Gigetto di Calcedonio, Annunziatina, the bells of Santa Maria. But it was a hatred which we kept hidden because we knew it was unjust; and our house was always full of people who came to ask for favours and to offer them. Sometimes the dressmaker made a special kind of dumpling for us. She would wrap a cloth round her waist and beat the eggs, and send Crocetta around the countryside to see if she could borrow a really big saucepan. Her red face was absorbed in her work and her eyes shone with a proud determination. She would have burnt the house down to make her dumplings come out a success. Her clothes and hair became white with flour and then she would place the dumplings with great care on the oval table where my husband wrote.

Crocetta was our serving woman. In fact she was not a woman because she was only fourteen years old. It was the dressmaker who had found her. The dressmaker divided the world into two groups—those who comb their hair and those who do not comb their hair. It was necessary to be on the lookout against those who do not comb their hair because, naturally, they have lice. Crocetta combed her hair; and so she came to work for us and tell our children long stories about death and cemeteries. Once upon a time there was a little boy whose mother died. His father chose another wife and this stepmother didn’t love the little boy. So she killed him when his father was out in the fields, and she boiled him in a stew. His father came home for supper, but, after he had finished eating, the bones that were left on the plate started to sing

Mummy with an angry frown Popped me in the cooking pot, When I was done and piping hot Greedy daddy gulped me down.

Then the father killed his wife with a scythe and he hung her from a nail in front of the door. Sometimes I find myself murmuring the words of the song in the story, and then the whole country is in front of me again, together with the particular atmosphere of its seasons, its yellow gusting wind and the sound of its bells.

Every morning I went out with my children and there was a general amazed disapproval that I should expose them to the cold and the snow. ‘What sin have the poor creatures committed?’ people said. ‘This isn’t the time for walking, dear. Go back home.’ I went for long walks in the white deserted countryside, and the few people I met looked at the children with pity. ‘What sin have they committed?’ they said to me. There, if a baby is born in winter they do not take it out of the room until the summer comes. At midday my husband used to catch me up with the post and we went back to the house together.

I talked to the children about our city. They had been very small when we left, and had no memories of it at all. I told them that there the houses had many storeys, that there were so many houses and so many streets, and so many big fine shops. ‘But here there is Giro’s,’ the children said.

Giro’s shop was exactly opposite our house. Giro used to stand in the doorway like an old owl, gazing at the street with his round, indifferent eyes. He sold a bit of everything; groceries and candles, postcards, shoes and oranges. When the stock arrived and Giro unloaded the crates, boys ran to eat the rotten oranges that he threw away. At Christmas nougat, liqueurs and sweets also arrived. But he never gave the slightest discount on his prices. ‘How mean you are, Giro,’ the women said to him, and he answered ‘People who aren’t mean get eaten by dogs’. At Christmas the men returned from Temi, Sulmona and Rome, stayed for a few days, and set off again after they had slaughtered the pigs. For a few days people ate nothing but sfrizzoli, incredible sausages that made you drink the whole time; and then the squeal of the new piglets would fill the street.

In February the air was soft and damp. Grey, swollen clouds travelled across the sky. One year during the thaw the gutters broke. Then water began to pour into the house and the rooms became a veritable quagmire. But it was like this throughout the whole area; not one house remained dry. The women emptied buckets out of their windows and swept the water out of their front doors. There were people who went to bed with an open umbrella. Domenico Orecchia said that it was a punishment for some sin. This lasted for a week; then, at last, every trace of snow disappeared from the roofs, and Aristide mended the gutters.

A restlessness awoke in us as winter drew to its end. Perhaps someone would come to find us: perhaps something would finally happen. Our exile had to have an end too. The roads which separated us from the world seemed shorter; the post arrived more often. All our chilblains gradually got better.

There is a kind of uniform monotony in the fate of man. Our lives unfold according to ancient, unchangeable laws, according to an invariable and ancient rhythm. Our dreams are never realized and as soon as we see them betrayed we realize that the intensest joys of our life have nothing to do with reality. No sooner do we see them betrayed than we are consumed with regret for the time when they glowed within us. And in this succession of hopes and regrets our life slips by.

My husband died in Rome, in the prison of Regina Coeli, a few months after we left the Abruzzi. Faced with the horror of his solitary death, and faced with the anguish which preceded his death, I ask myself if this happened to us—to us, who bought oranges at Giro’s and went for walks in the snow. At that time I believed in a simple and happy future, rich with hopes that were fulfilled, with experiences and plans that were shared. But that was the best time of my life, and only now that it has gone from me forever—only now do I realize it.