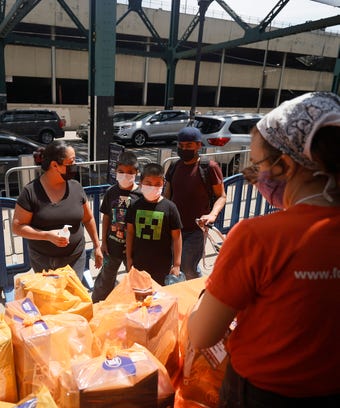 As it turns out, there's an easy, straightforward way to reduce the endemic poverty and hunger in America: money. According to new data from the U.S. Census Bureau's recent Household Pulse Survey, adults living with children reported lower levels of food insufficiency after receiving their first Child Tax Credit (CTC) check. The survey asks respondents if they're struggling to pay their expenses, and while adults without children are still having a harder and harder time putting food on the table, there appears to be a direct relationship between food security and monthly checks of $300. Who would have thought?

The checks are already making a difference. The HPS survey results show that nearly half of the recipients spent their money on food, while others were able to secure childcare. "In a way, this tax policy is a feminist policy by supporting parents with children and knowing there are a lot of single mothers," Lucy Marcil, an executive director at StreetCred, an organization that helps families navigate tax credits, told Jezebel. As Marcil noted, an overwhelming number of mothers had to leave the workforce during the COVID-19 pandemic.

Rep. Rosa DeLauro, who has long been fighting to end child poverty, says that it's imperative we continue to extend the child tax credit. "The extent of the policies over the last several months, if you will, with the CARES Package, the Rescue Plan, the Heroes Package, et cetera, they’ve had a profound impact on lowering child poverty in the United States," she said during a recent appearance on MSNBC. "But it isn't enough that this program is for a year or that it is extended for two or three years. It has to be permanent if this is going to work…. Families are on edge. They are on a fiscal cliff. They can't afford childcare, they can't afford diapers."

And if the checks extend indefinitely? "It's of equal importance to the Social Security Act," Garfinkel said. "It's that big."