Happy as a Clam in Ipswich, Massachusetts with a Nighttime Dune Stroll

The landscape dramatically changes with the season in Ipswich Mass. The marshlands are turning from green to gold. Narrow canals and creeks meander, changing with the tide and leading the eye down to the distant sea.

We arrived anticipating all of this, and the full moon that usually brings a string of Indian summer days. We were traveling through the Great Marsh landscape of Crane Neck, to the Inn At Castle Hill which would be our home base for the next few days in Ipswich, Massachusetts.

I discovered Crane Beach years ago when I lived in Boston and have periodically returned over the years because of the 4-mile white-sand beach and five miles of hiking trails through the dunes through a maritime pitch pine forest. It offers both beauty and solitude. The first people who lived on the land now known as The Crane Estate were the Agawam Native American tribe.

The Inn at Castle Hill is situated on the Trustees of Reservations Crane Beach estate. Formally this was the home of the Crane family who bought this property on and around Castle Hill which was 800  acres in 1910.

It was eventually expanding to form the 2100-acre Crane Estate.  The Crane’s money came from Richard T. Crane’s plumbing business, which helped bring the bathroom facilities inside homes.

The Cranes lived in the cottage, the Inn at Castle Hill, while their great house and gardens were being designed and built. After his death in 1945, the family gave 1000 acres comprising most of Crane Beach and the dunes of Castle Neck to the Trustees.

We planned this trip to witness the full moon. The full moon hike through these dunes was what most intrigued me as it was something we had never done. The beach and the landscape alone were enough but as a photographer, I was beyond excited to experience this setting in another way.

October’s full moon, bears the moniker, the Harvest Moon. It falls closest to the Autumnal Equinox and is named so because of the extra hours of moonlight to help harvest the crops.

We showed up at the trailhead and 30 other people did too for this trustee-led 2 ½ hours guided tour starting at 6:00 P.M., just in time to witness the sunset. Lisa, our guide and a professed “lover of nature” started the eager group of all shapes and ages by asking us to observe our sun shadow. It was long and tall at the end of the day.

Off we went. Lisa offered her knowledge and love of her job. We learned about the Pawtucket Indians that once inhabited the land referred to as Agawam Place, which means “the other side of the marsh.” 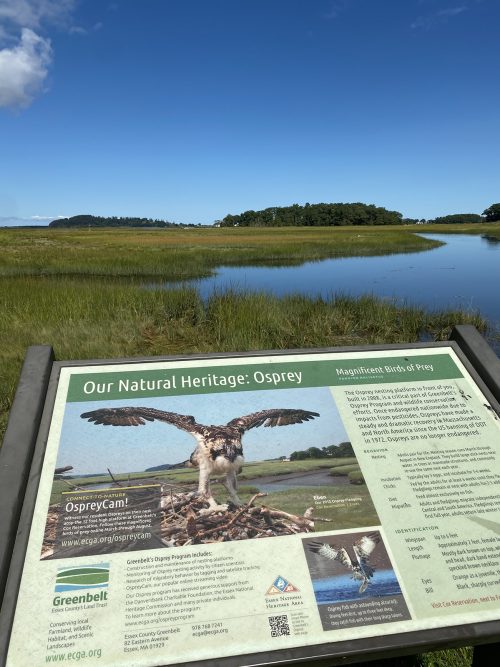 We followed the winding and sandy trail that eventually descended down to the beach. Perfectly orchestrated and almost magically, a gigantic orange ball ascended.

We watched the orange moonrise. It added another element to the already unearthly landscape as the wet sand took on an orange glow. 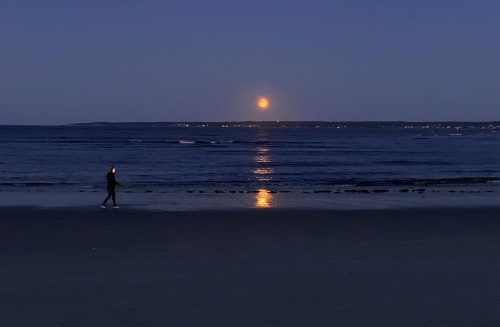 We walked back by the light of the moon. The landscape visually changed and softened as we made our way back. We ended the hike with our moon shadow. It was at that moment, that you could really feel a sacred sense of place.

Crane Beach is still one of the world’s most important nesting sites for piping plovers. They were almost extinct in the 19th century due to extensive hunting for its eggs and feathers. Sections are seasonally roped off to protect this threatened bird during nesting season.

Full belly clams are another claim to fame and the area is known as the home of the fried clam. Ipswich and the neighboring town of Essex. It’s said they get their unique and flavorful taste because the clams are harvested from the mud of the salt marshes along the local rivers. Generations of families claim to have the best secret recipe.

We checked out a few places. J.T. Farnham’s, set at the edge of a salt marsh on a side road was lined with cars at lunchtime.

History dates this place back to 1941 and has been serving up the famed fried clams and lobster rolls for generations. It still looks as if time has stood still.

There isn’t a place in town that doesn’t try its hand at clams. Tom Guntne, owner and chef of Ripple Restaurant claims to cook the best around. Almost all of these places have a view. Picnic tables overlook the views and I’m sure, improve the taste.

I also got a chance to check out the fairly new state-of-the-art craft brewery- the Great Marsh Brewery. Set with sweeping views of the salt marsh and nearly 20 kinds of craft beers and all-natural hard seltzer with flavors like blood orange, blueberry, and plum was a welcomed landing after a day at the beach.

History dates the area and besides clams, the area was known for wooden shipbuilding for nearly 300 years. History also tells us that the Cranes were committed to having continuity between farming and their gardens.

Today, the trustees are restoring and replanting in a sustainable way with an educational piece for the public to learn about the indigenous people—what they grew and harvested and what is native to the land today.

Recent studies have shown that tribes had been living along these coastal and riverine areas for thousands of years. One of the most important discoveries about native American history was made in 1951 at our own Bull Brook site. Carbon dating proved that artifacts found at this site belonged to inhabitants of the Paleo-Indian period, about 9000 B.P. (Before Present).

The cozy Inn At Castle Hill is set on a hill surrounded by hydrangea bushes, this time of year in bloom, with a commanding view of the marshland, Fox Creek, and the sea beyond. Every morning I had coffee looking out at this incredible vista.

It’s a short walk up to the great house and gardens. On my walks, birds abounded. I saw a fawn and a doe on a nearby hill, and wild turkeys below. The morning dew shining in the early morning sun glistened the plants and blooms and another day began. Ahhh…

The Inn’s gardens are extensive. A rose garden is dotted with statues and urns with well-established blooming plants. There’s even a wild garden originally designed by Frederic Law Olmstead.

It is a chance to walk through history, in visible beauty and a way to imagine living in another time. The Grand Allee with its rolling hills takes you from the top of the promontory down to the beach. You can have it all.

Another way to enjoy this natural treasure is for paddlers to venture to Choate Island, also known as Hog Island and also part of the Crane Wildlife Refuge managed by the Trustees of Reservations.

Besides its reputation for birding, Choate Island was the location for the 1996 film, The Crucible, based on Arthur Miller’s play about the Salem Witch Trials.

Guided kayak tours around the Crane Wildlife Refuge can be booked through the Trustees and other outfits that explore the Essex River estuary area. Unfortunately, they ended just the week before we were there. There’s always magic in the shifting sands.

As a travel writer, I think it’s important to note that it has not been an easy time to travel in the days of COVID so taking a relatively short car ride to “another world” was such a welcome relief to satisfy the travel bug and to have a change of scene and adventure into the natural world.

For me, being outside in nature helps mitigate some of the stress of these unknown times. I left feeling calmer, breathing a little deeper and with the words from Lisa, the guide, “There’s always magic in the shifting sands.”