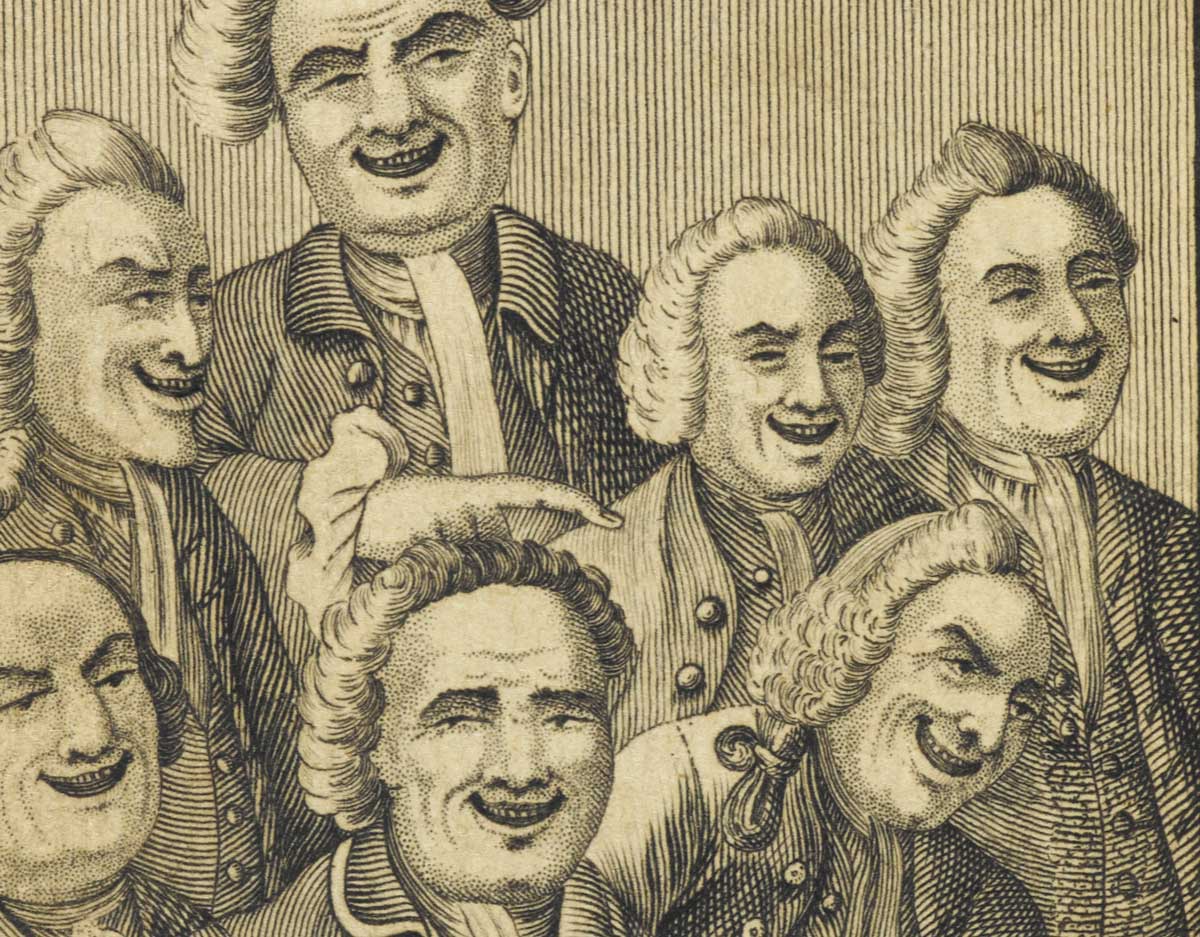 Why do we laugh? Thomas Hobbes thought he knew the answer, as he did to most questions. Ridicule, to Hobbes, was a species of contempt. To laugh at something was to deride it. To be laughed at was to be slapped round the chops, an experience both painful and demeaning. Most importantly, ridicule always had a victim. Harmless mirth did not exist. This rather limited sense of ridicule proved shockingly resilient. Seventy-five years after Hobbes died, Samuel Johnson defined it in terms that would have been deeply familiar to the old philosopher: ‘Wit of that species which provokes laughter, and is designed to bring the subject of it into contempt; derision; mockery; sport; satire; sarcasm.’

But there is another way of thinking about ridicule. In the early years of the 18th century a select group of philosophers began to conceive of laughter as something that might police the boundaries of sociable conduct. The chief exponent and theorist of this new school of thought was Anthony Ashley-Cooper, 3rd Earl of Shaftesbury. Daunted by the boisterous reality of London’s taverns and coffee houses, Shaftesbury obsessed over the impoverished condition of everyday social interaction. He saw the refinement of laughter as an important weapon in his crusade to improve English manners, replacing the embittered grunts and guffaws of the mob with cultivated chuckles. Certain immoral, unsociable and unnatural behaviours were intrinsically ridiculous and worthy of scorn, he thought. If disdainful Hobbesian laughter strained the bonds of community and fellow feeling, then this new Shaftesburian banter could bond virtuous citizens in shared contempt for the corrupt and profane. Laughing at vice would become a means of signalling virtue. To snigger at a righteous action was, by contrast, the surest route to exposing one’s own moral deficiency.

In Uncivil Mirth, Ross Carroll charts the tension between these two ways of thinking about ridicule. The book ranges across the 18th century, from Shaftesbury in the early years through the titans of the Scottish Enlightenment to Mary Wollstonecraft in the final decade. Despite his title, it is the tradition of civil mirth that principally occupies Carroll, the question of how laughter came to have ‘social value’ in the fight against prejudice and intolerance. In pursuit of an answer, Carroll has crafted a work of scholarship that is elegant, even-handed and deeply engaged with both the period in question and our own present moment. There are lessons to be learned by returning to this 18th century debate. Carroll is the man to find them.

The opening chapters tracing the early development of Shaftesbury’s theory of ridicule are virtuosic examples of intellectual history. Using both manuscript notebooks and the major published works, Carroll charts how Shaftesbury came to think that good-natured ridicule could become an antidote to religious and political persecution. For all his brilliance as a thinker and prose stylist, Shaftesbury was very limited as an observer of society. He refused to acknowledge the simple fact that much ridicule was born of malice and fuelled by intolerance. If there is a weakness in Carroll’s excellent book, it is that he follows the earl too closely. There is little room for laughter and ridicule as they were experienced outside the narrow preserve of an exalted elite. Thoughts on everyday rudeness and ribaldry are curiously muted.

This focus is partially a reflection of the source material. Going back through Shaftesbury’s published writings, one detects more than a touch of snobbery, as though, when surrounded by the laughter of others, he refused to get the joke. The characteristic move of this po-faced killjoy was to label raucous displays of humour antisocial when they were simply politically unpalatable. A case in point is his censorious response in 1710 to the impeachment of the Tory preacher Henry Sacheverell, charged with high crimes and misdemeanours for an inflammatory sermon. Shaftesbury’s instinct was not to answer the priest with mere ridicule; it was to welcome his prosecution and the burning of his books. Laughter could only get one so far. Sometimes one needed the law.

The limitations of ridicule as a polemical resource are acutely demonstrated towards the end of the book. In theory, ridicule ought to be particularly effective against true moral abomination. To engage seriously with arguments in favour of chattel slavery, for instance, merely demonstrates that those arguments are worth taking seriously. By contrast, ridicule viscerally shows that an argument is beneath criticism, unworthy of refutation. And yet this strategy could also prove dangerous. In his chapter on the Scottish abolitionist movement, Carroll tells how Alexander Geddes composed a mock defence of ‘the trade in human blood’, only for anti-abolitionists to seize it as a positive vindication of their position.

Indeed, the central problem running throughout the debate is that power, real power, is impervious to ridicule. As Carroll acknowledges, Shaftesburian optimism ‘cannot long survive contact with the reality of a world in which elites barely register the mockery levelled against them’. This is particularly true when the object of ridicule gets in on the joke. One salient example is absent from Carroll’s book. Early in 1728 the British prime minister Sir Robert Walpole went to a performance of John Gay’s new play The Beggar’s Opera. Deep into the second act, as the barbs against his corrupt regime became increasingly pointed, the audience began to laugh. Isolated giggles at first, but soon the entire auditorium was howling with mirth. Did Walpole storm out in a fit of rage? Did he sink into his seat, cheeks flushed with embarrassment? He did neither of those things. He tilted back his head, puffed out his chest and joined in the laughter.

Joseph Hone is author of The Paper Chase: The Printer, the Spymaster, and the Hunt for the Rebel Pamphleteers (Chatto & Windus, 2020).