What’s the worst that could happen from wrong fashion choices? A little bit of teasing and ridicule from your friends, sure. But rarely will anyone try to enforce one’s personal style upon another with violence. Yet that’s exactly what happened nearly a century ago in New York.

Back in the 19th and early 20th centuries, hats were a popular accessory to every gentlemen’s street attire. Men wore hats throughout the year, whether it was freezing cold or sweltering hot. But wearing hats during summer was uncomfortable. So starting from the 1900s, men started wearing breathable straw hats during the summer months. Initially, they were worn only during sporting events such as boating, and these hats came to be called boaters. Eventually, the summer head-wear was deemed acceptable to be paired with any attire and even professionals wore them to work. 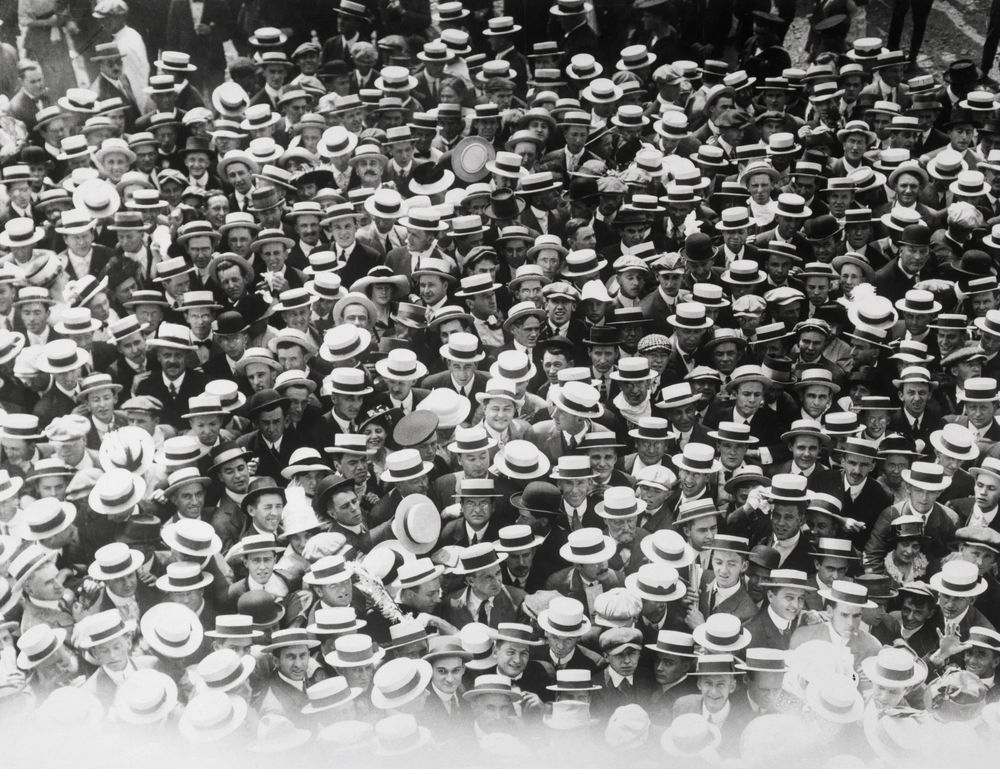 A sea of straw hats seen at a baseball match.

However, there was an unwritten rule that men had to retire their straw hats once summer was over, and return back to the more appropriate felt or silk hats. Although summer typically ends between September 21 and 24, the date that was chosen for this change was September 15. Anybody who wore straw hats past that date risked losing their headgear to any street urchin, who would knock it off the wearer’s head and stomp it with their feet. The practice became such a nuisance that newspapers cautioned citizens as September 15 approached.

Some instances of hat-snatching became violent that others. The Pittsburg Press, in an article dated September 15, 1910, described an incident where the police had to interfere in “more than one instance to protect straw-lidded pedestrians.” While chalking up the organized demonstrations against straw hats up to the “sheer exuberance of youth”, the Press foresaw dangerous consequences if things were taken too far: “It is all right for stock brokers on the exchanges to destroy one another’s hats if they like, on the principle that everything goes among friends. But no man likes to have his hat snatched from his head by somebody he has not yet been introduced to, and if the informality should become general there will sure to be a number of obstinate gentlemen (most likely with English blood in their veins) who will coolly proceed to treat the fun-making as a physical assault and defend themselves in a manner which will spoil the fun for all concerned.” The article warned: “The best time to prevent such an outcome is now, before it happens.”

The Pittsburg Press’s observation came true twelve years later, in 1922. It began when a few kids decided to jump start on the tradition two days in advance, and began snatching hats off some factory workers and stomping on them. When the gang tried to pull the same stunt on a bunch of dock workers, the men retaliated and a brawl ensued. The brawl got so bad that it stopped traffic on the Manhattan Bridge. Police eventually broke up the fight and arrested a few people. 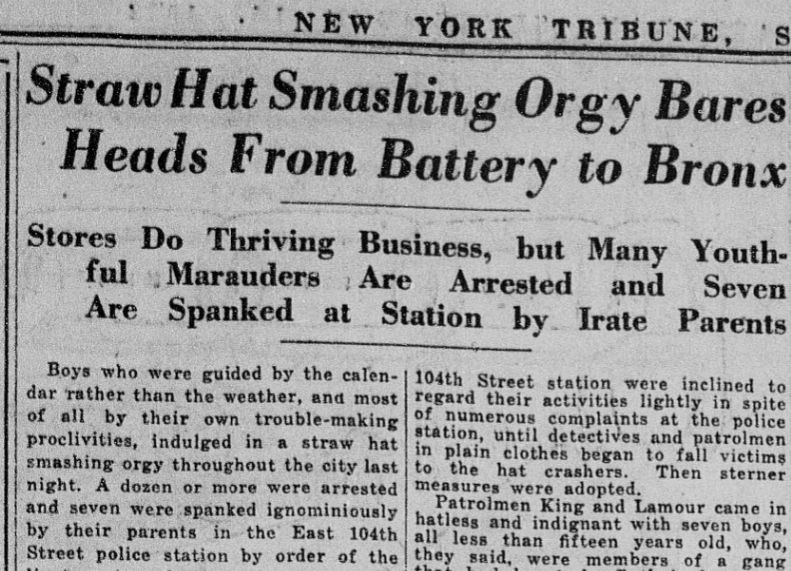 That evening, gangs of teenagers prowled the streets wielding large sticks, sometimes with a nail driven through the top, looking for pedestrians wearing straw hats and beating those who resisted. Even the police were not spared. One detective was attacked by a gang at 102d street and Third Avenue and his hat thrown into the street. “He ran after his tormentors, was tripped, and fell headlong into the gutter,” reported The New York Times. Several men were hospitalized from the beatings they received after resisting having their hats taken, and many arrests were made.

The riots continued the next day and the day after. In these three days, dozens of arrests were made, but since many of those involved in hat-snatching were under 15, they were let off with a fine. Others had their parents summoned and instructed to give their kids a good spanking, which many fathers compiled. The longest sentence anyone received was three days in jail.

While many suffered during the riots, hat stores profited. They reportedly stayed open late and thrived selling felt hats.

The tradition of hat smashing continued for some time after the riots of 1922, and one man was even killed for wearing straw hat during another riot in 1924. Similar riots ensued in 1925 and many arrests were made in New York.

The practice died out by the 1930s as straw hats fell out of fashion in favor of Panama hats.