The ethnic background of Cleopatra, the famed queen of Ancient Egypt, has been a persistent topic of conversation for years. Despite the fact that she ruled over Egypt, Cleopatra was Greek.

Cleopatra VII Philopater ruled over Ancient Egypt from 51 to 30 BC and was the last ruler of the Ptolemaic Kingdom in Egypt. After her death, the Roman Empire took control of the country.

The Ptolemaic Dynasty was formed by Ptolemy I Soter, a Greek general in Alexander the Great’s army, in 305 BC. Although located in Egypt, the dynasty that Ptolemy established remained incredibly Greek.

Cleopatra, a direct descendant of Ptolemy, was the first Ptolemaic ruler to learn the Egyptian language, as all those before her spoke only Greek. She was also believed to have spoken Ethiopian, Hebrew, Aramaic, Arabic, Syriac, Median, Parthian, and Latin.

Renowned for her intellect and wit, Cleopatra was described as incredibly seductive and persuasive, qualities which added to her mystery throughout the centuries.

She has become a popular figure in media, literature, and art, and her enchanting qualities, romantic relationships, and beauty, which is debated, are often the focus of such works.

Most of the information available about Cleopatra’s life comes from Plutarch, who was born sixteen years after the Greek queen died.

According to surviving ancient sources, Cleopatra’s father was Ptolemy XII while her mother was likely Cleopatra V Tryphaena. When her father passed away, Cleopatra, who was eighteen at the time, was next in line for the throne followed by her brother Ptolemy XIII, who was 10.

The two siblings were to be married and rule together, but Cleopatra soon began to exert more power over her younger brother, which caused tension between the two.

The issue of two heirs proved bloody for the dynasty. Soon after she took the throne, Cleopatra’s advisers betrayed her, and she was forced to flee Egypt.

While in exile in Syria, Cleopatra amassed an army and set out to the outer reaches of Egypt to face her brother’s troops in a civil war.

As the war raged on, Ptolemy III, Cleopatra’s brother, sanctioned the murder of the Roman general Pompey, who was Julius Caesar’s rival.

When Caesar was welcomed into Alexandra, the center of Ptolemaic Egypt, Cleopatra saw an opportunity to regain power. According to ancient sources, the queen snuck into the palace to meet Caesar and try to form an alliance with the Roman leader.

The pair had the same adversary—Ptolemy III, Cleopatra’s brother. Caesar was in Egypt trying to receive the money that was owed to him after Cleopatra’s father died, and Ptolemy III was ready to fight a battle over paying the debt.

A war broke out between the outnumbered Roman forces and the Egyptian king, and the battle seemed all but decided until Roman reinforcements arrived. Upon the Roman army’s entry into Egypt, Ptolemy III’s forces crumbled, and he was forced to flee Alexandria. According to ancient sources, he later drowned in the Nile.

Caesar entered Alexandria as a conquering ruler and placed Cleopatra, along with her other younger brother Ptolemy XIV, on the throne.

Caesar remained in Alexandria for a time after returning the throne to Cleopatra, and it is heavily implied that he fathered the Greek queen’s son, Caesarion, or “Little Caesar,” before returning to Rome.

In 46 to 45 BC, Cleopatra and her son visited Caesar in Rome, and stayed in his villa. The Greek queen of Egypt stayed in Rome until Caesar was assassinated in 44 BC, after which she returned to Egypt.

Shortly after her return to Egypt, her brother and co-ruler Ptolemy XIV was killed, likely on Cleopatra’s own orders. After her brother’s death, Cleopatra’s three-year-old son, Caesarion became the new co-ruler.

This setup was ideal for Cleopatra, as it provided her with a co-regent who was unwilling and incapable of betraying her, basically allowing her to rule on her own.

Throughout her reign, the Greek queen of Egypt also linked herself to various deities, such as Isis, which further cemented her role as ruler of the land.

Additionally, turmoil erupted in Rome in the wake of Caesar’s assassination, as his former allies, Mark Antony, Octavian, and Lepidus, fought for control against his assassins, Cassius and Brutus.

Both sides of the conflict sought out support from Cleopatra, and perhaps unsurprisingly, she offered Roman reinforcements that had been stationed in Egypt to support Caesar’s allies.

This aid likely contributed to the victory of Caesar’s allies, and after their win, Mark Antony and Octavian ruled over Rome.

Mark Antony and the Greek queen of Egypt

Mark Antony then invited the Greek queen to Tarsus, located in modern-day Turkey, to meet her in person. According to ancient sources, Cleopatra came dressed in the robes of the goddess Isis and dazzled the Roman leader.

Antony, taken by the queen of Egypt, pledged that he would support her rule in the country. When Cleopatra returned to Egypt, Mark Antony decided to leave his family, including his wife and children, to spend time in Alexandria.

While there, he carried on partying with Cleopatra. The pair even formed a drinking club called “The Inimitable Livers,” ostensibly as a group to honor the god Dionysus but likely to drink and revel.

As Cleopatra maintained power over Egypt, the country became one of the wealthiest and most influential in the Mediterranean. Antony even traveled to Egypt and sought financial support from Cleopatra for a military mission that his country could not afford.

Upon Cleopatra offering him the funds, Antony returned a number of countries that were once part of the Egyptian Empire, including Cyprus, Crete, Libya, and much of the Levant.

While Antony was staying in Egypt, Cleopatra gave birth to her son, Ptolemy Philadelphos, in 36 BC. He then refused to return to his wife in Rome and decided to stay in Egypt, where he declared that Cleopatra’s son, Caesarion, was Caesar’s true heir and even offered money and land to the three children he fathered with the queen.

Octavian, Antony’s co-ruler in Rome, had already been searching for a way to undermine his partner so that he himself could conquer the Roman world.

After learning of Antony’s antics in Egypt, Octavian decided to convince the Roman Senate to declare war on Egypt and Cleopatra, knowing that Antony would take her side, by saying that Antony was looking to establish a new Roman capital in the country.

This lead to the famous Battle of Actium, during which Octavian crushed Antony and Cleopatra’s forces. The couple were separated as they both fled to Alexandria. On the journey back to the Egyptian capital, Antony heard a rumor that his beloved had killed herself, so he fell on his own sword, only to die after learning that the rumor was not true.

Upon arriving in Alexandria, Cleopatra buried Antony and retreated to her chamber, where she took her own life. Plutarch states that she died at 39 after being bitten by an asp, a poisonous snake, which was a symbol of divine royalty. Other sources claim that she poisoned herself.

The death of both of his rivals allowed Octavian to take sole control of both Rome and Egypt, and with this consolidation of power, Octavian, renamed Augustus, became the first Roman Emperor.

Cleopatra’s legacy as an exotic, seductive, and powerful ruler of Egypt has persisted throughout the centuries. While she is now popularly known for her love affairs, suicide, and beauty, Plutarch actually stresses that she was not very attractive physically, but that her charm and intelligence was irresistible.

The Greek queen of Ancient Egypt has become a popular symbol of powerful, seductive women, with countless films, paintings, and stories written in her honor. 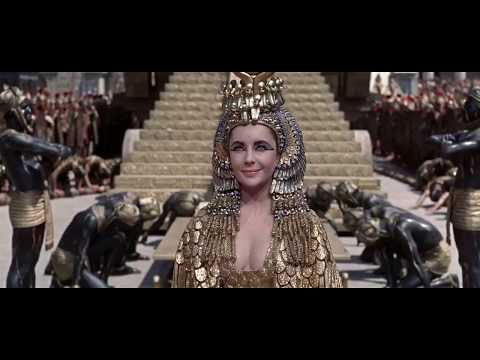