In 431 BCE, the Athenian statesman Pericles delivered one of the most influential speeches of all time, “Pericles’ Epitaphios,” otherwise known as “Pericles’ Funeral Oration.”

The speech, recorded by the historian Thucydides who was present at its delivery, has endured for millennia as one of the most compelling descriptions of democracy in history. It has informed subsequent epoch-making orations from Lincoln at Gettysburg to Kennedy and Obama.

The occasion was the funeral of the first Athenian soldiers to lose their lives in the Peloponnesian War.

In the speech, Pericles, the first great statesman of the ancient world, says that he wished to focus on “the road by which we reached our position, the form of government under which our greatness grew, and the national habits out of which it sprang” in addition to praising the dead.

This amounts to a snapshot of the Athens of the time; historians say that Thucydides’ Pericles thus “decides to praise the war dead by glorifying the city for which they died.”

“If we look to the laws, they afford equal justice to all in their private differences…if a man is able to serve the state, he is not hindered by the obscurity of his condition. The freedom we enjoy in our government extends also to our ordinary life. There, far from exercising a jealous surveillance over each other, we do not feel called upon to be angry with our neighbor for doing what he likes…”

These sentences form the roots of the famous Greek concept of “equal justice under law.”

The liberality of which Pericles spoke also extended to Athens’ foreign policy, as we can hear Pericles say to his listeners: “We throw open our city to the world, and never by alien acts exclude foreigners from any opportunity of learning or observing, although the eyes of an enemy may occasionally profit by our liberality…”

He speaks highly of the power of the ordinary people, saying: “Advancement in public life falls to reputations for capacity, class considerations not being allowed to interfere with merit…our ordinary citizens, though occupied with the pursuits of industry, are still fair judges of public matters…at Athens we live exactly as we please, and yet are just as ready to encounter every legitimate danger.”

In the conclusion of the Oration, Pericles declares: “In short, I say that as a city we are the school of Hellas; while I doubt if the world can produce a man, who, where he has only himself to depend upon, is equal to so many emergencies, and graced by so happy a versatility as the Athenian.”

He says in summation of his beloved city “…for the Athens that I have celebrated is only what the heroism of these and their like have made her…none of these men allowed either wealth with its prospect of future enjoyment to unnerve his spirit, or poverty with its hope of a day of freedom and riches to tempt him to shrink from danger.”

“No, holding that vengeance upon their enemies was more to be desired than any personal blessings, and reckoning this to be the most glorious of hazards, they joyfully determined to accept the risk,” said Pericles, emphasizing that “Thus, choosing to die resisting, rather than to live submitting, they fled only from dishonour…”

Pericles finished his overview of the city-state of Athens and her people by saying: “Therefore, having judged that to be happy means to be free, and to be free means to be brave, do not shy away from the risks of war.”

Ancient Greece scholar Sheehan Quirke (aka The Cultural Tutor) writing on Twitter has recently made a great analysis of the rhetorical devices used by Pericles to intrigue, inspire, and persuade his audience. “The speech has achieved legendary status because of its rhetorical brilliance, its composition, and its success,” he writes.

Pericles managed to encapsulate all that was great about Athens, rouse his people from grief at their recent losses, and persuade them to continue the war.

Antithesis refers to the contrasting of two ideas in a single sentence. Contrasting two distinct ideas makes understanding the “right one” easier for the audience.

This is the unexpected, mid-sentence discontinuation in the expression of an idea often accompanied by an abrupt and intentional grammatical mistake. This grabs the audience’s attention almost like a wake-up call and makes the framing of ideas more poignant.

This refers to the skipping of one or more conjunctions (such as the word ‘and’). Again, this is technically a grammatical error. It builds momentum. Removing the conjunction binds each clause together more closely. The audience senses a surging idea in your words. 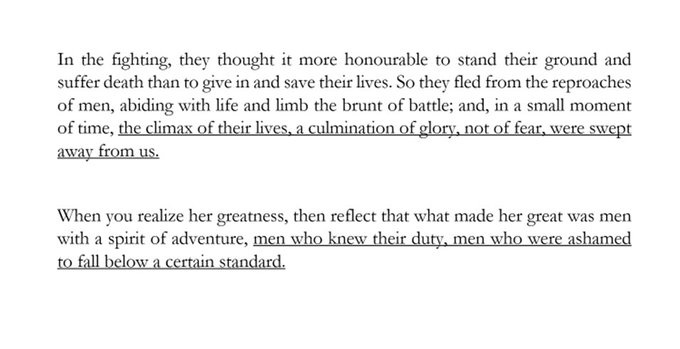 When the normal word order of a sentence is changed, this is anastrophe. This allows you to emphasize a particular word or part of the phrase. It can also add a lyrical, poetic quality to what you’re saying.

Repeating the last word of one clause at the beginning of the next is referred to as anadiplosis. It emphasizes that word. It becomes the fulcrum of the sentence.

This is the deflection of potential criticism of something negative by pointing out a positive. It’s great to show some humility—recognizing a problem. And it’s one step better to offer a solution. 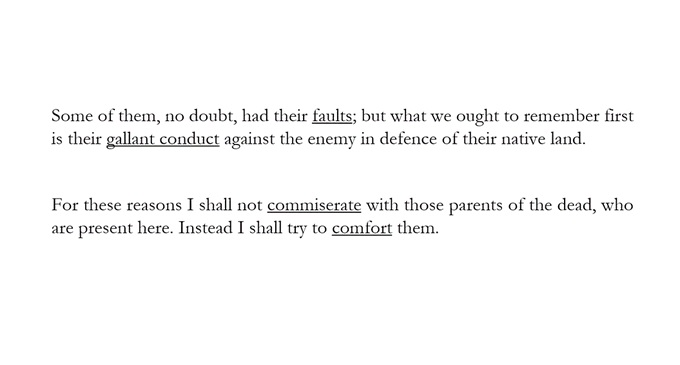 A single word (or short phrase) that calls for the audience’s attention at the start of the sentence is asterismos. A normal example is to start by saying “Listen.” It is a way of asking the audience to pay careful attention to what comes next. 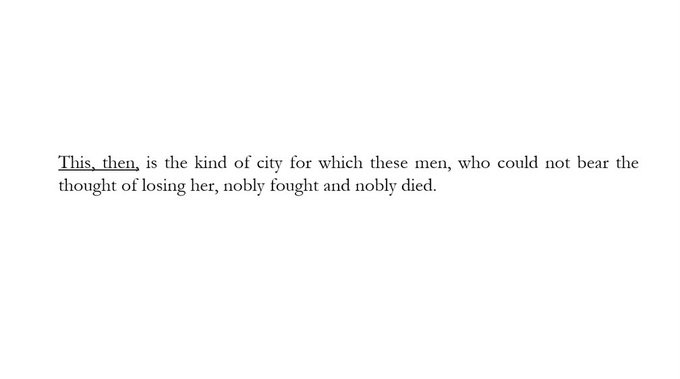 Eutrepismus is the laying out of the order of your speech either numerically or chronologically. This does a couple of things. It gives your audience an idea of what to expect, and it adds an overall clarity and structure to your speech right from the start. 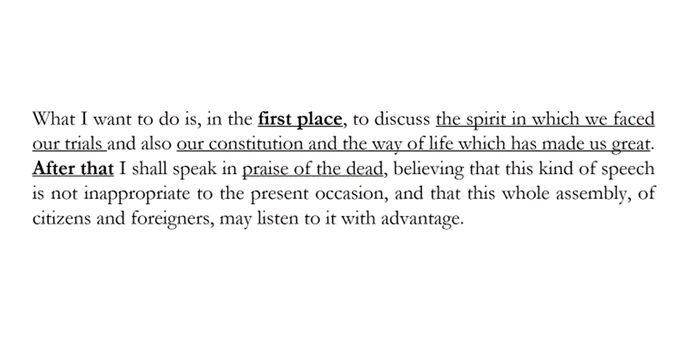 Raising a potential rebuttal to or problem with your speech and immediately addressing it is called procatalepsis. This, of course, strengthens your argument. It also earns the trust of the audience by showing an awareness that there are potentially other views on the matter at hand. 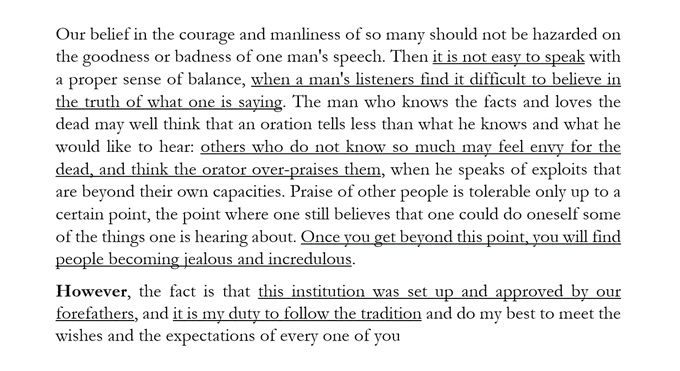 Referring to something by a concept or object closely associated with it is metonymy. It lights a spark, so to say, in the audience’s mind: you can present an argument much more creatively and memorably by using metonymy.

Repeating a word (or series of words) at the beginning of consecutive clauses or sentences is known as anaphora. It does several things, one of which is building momentum. It can also be used to contrast different ideas. 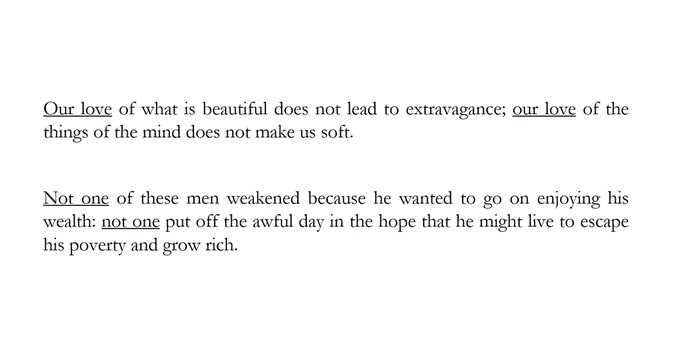 Bringing something up by claiming you don’t want to mention it is apophasis. This is normally either a humble brag or a sly dig. However, it can also serve as an indirect way of reminding your audience of something without going into detail. 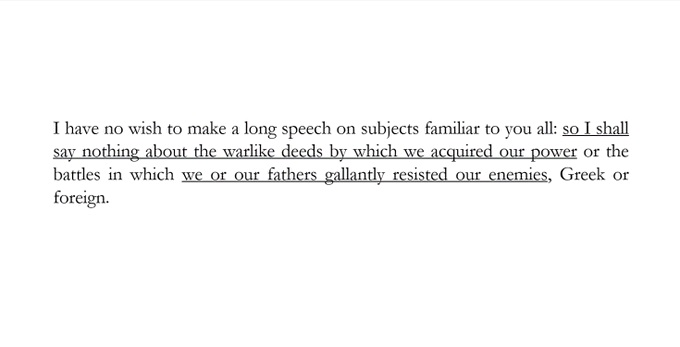 Symploce is words or phrases used at the beginning AND the end of clauses or sentences. This creates a beautiful, mirror-like quality to your words. It also allows you to make elegant contrasts or comparisons of ideas or of things.

An of expression of doubt, real or feigned, in the whole purpose or nature of your argument/speech is aporia. This catches the audience off-guard and intrigues them. It can also set you up to overcome that doubt later on, thereby exceeding your audience’s expectations. 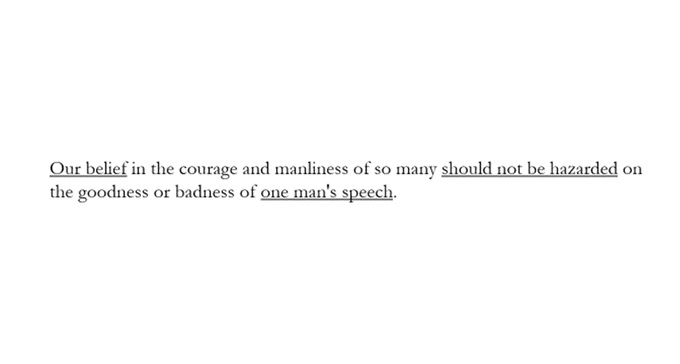 When an idea is repeated multiple times, but the way it is expressed changes, this is know as exergasia. This allows you to build momentum around a single point or idea. It can create a complex, compelling wave of logic or emotion that is hard for the audience to resist. 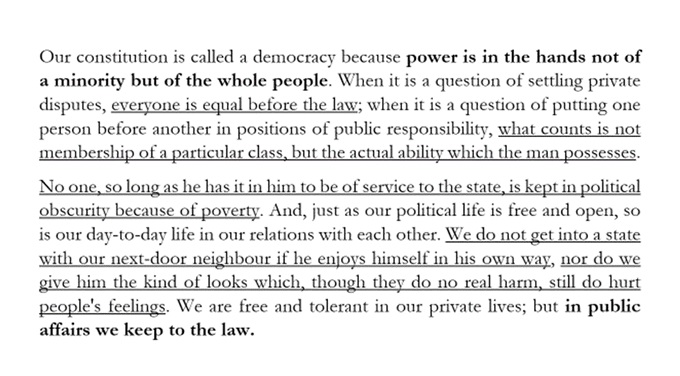 Dysphemism is when a negative term is used to replace a neutral one. It is the opposite of euphemism. It can be funny, caustic, or manipulative. It certainly adds some texture—in the form of imaginative language—to your speech.

Using an understatement to emphasize the idea you’re referring to is known as litotes. This often features a double negative. This works because a double negative catches the audience’s attention and forces them to think. It also breaks the monotony of expressing things in the same way. 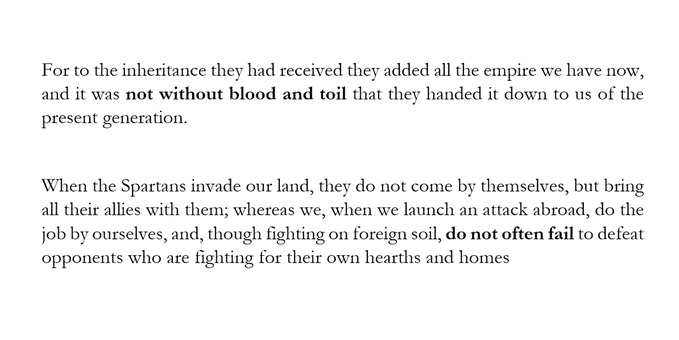 The use of a phrase in consecutive clauses but with reversed word order is antimetabole. This adds a lyrical quality to your speech. It also slows things down and adds an unexpected emphasis to your point. 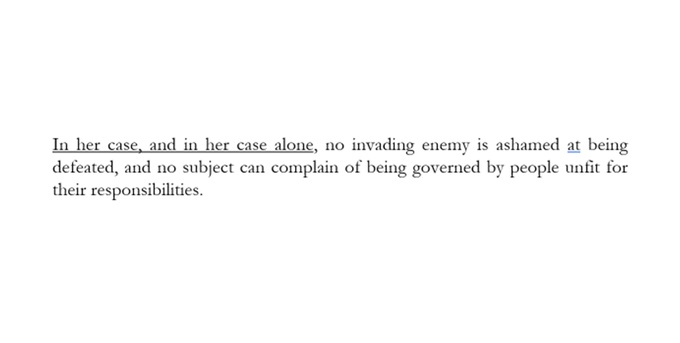 Apart from using these techniques to make great speeches, you can also use them in emails, over a drink, or at work, Sheehan Quirke (aka The Cultural Tutor) says.