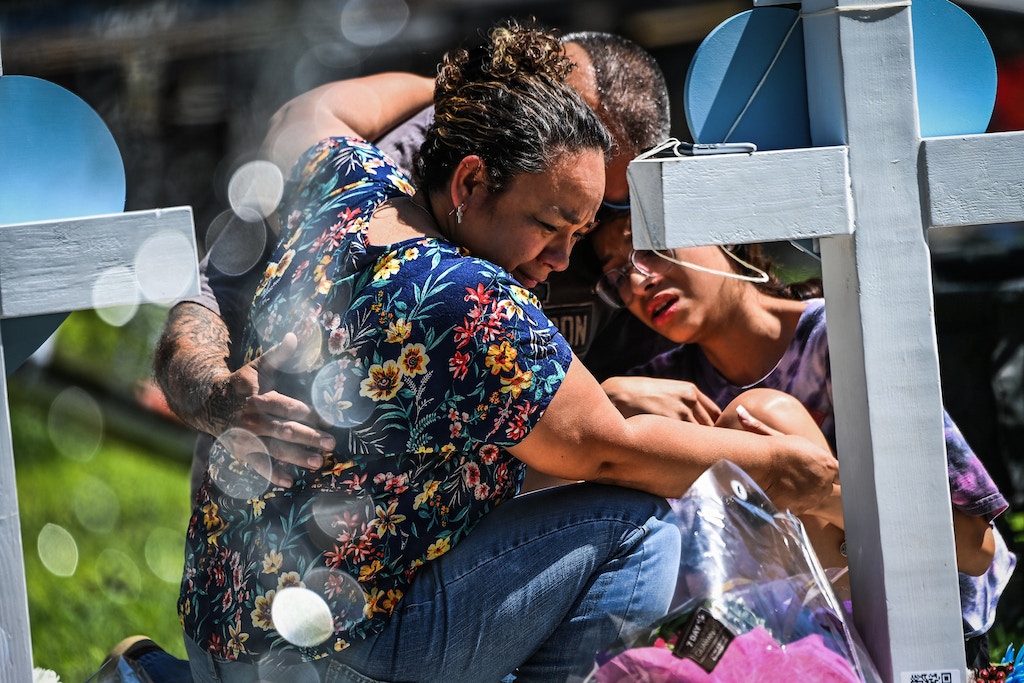 People mourn at a makeshift memorial outside Uvalde County Courthouse in Uvalde, Texas, on May 26, 2022.

It is one of the rituals of school shootings in America — another round of debate, usually among journalists, on whether graphic photos should be published. If people could just see what assault weapons do to young bodies, the argument goes, they would no longer tolerate the policies that enable these killings. No, the other side warns, these photos would only cause further pain to the survivors and have no impact on a divided society that moves from one gruesome entertainment to another with the flick of a switch.

This debate skips along the surface of an American aberration: We passively tolerate high levels of violence while actively suppressing evidence of the slaughter. It is not just school shootings that we forbid ourselves from seeing — and I mean really seeing, not the thoughts-and-prayers equivalent of gazing in sadness at memorial wreaths. It is also the visual evidence of more than 1 million people who died from Covid-19 in the U.S that we don’t see. It is the visual evidence of not just American soldiers killed in our forever wars, but the far greater number of civilians who have perished (at least several hundred thousand in Iraq). And it is the other forms of avoidable death in our homeland that we don’t really see, including traffic violence and drug overdoses.

The scale of American violence is awe-inspiring in all the wrong ways. The rate of shootings — school shootings, mass shootings, police shootings, accidental shootings, suicidal shootings — is top of the charts compared with almost every other country on our planet. The same goes for the other ways Americans kill and die; we excel at the fatal work of extinguishing each other. No single factor can be blamed, but it’s notable that energetic measures are consistently taken to prevent us from seeing what is done. These measures have only intensified as our society has become more visual, with screens tuned to every aspect of the human experience except its final act. As the photographer Nina Berman explained to a New York Times reporter a few days ago, “For a culture so steeped in violence, we spend a lot of time preventing anyone from actually seeing that violence. Something else is going on here, and I’m not sure it’s just that we’re trying to be sensitive.” Law enforcement officers obstruct the view from members of the press during the joint funeral service for teacher Irma Garcia and her husband Joe Garcia on June 1, 2022 in Uvalde, Texas.

There’s a curious thing about this visual void: It requires an aggressive act of construction to come into existence. Let’s look first at school shootings.

There are several barriers that prevent us from seeing graphic photos of school shootings. The first is that the victims tend to be inside their schools, which are crime scenes that the police seal off from reporters. Even after the job of evidence collection is finished and the cleaners are called in, journalists are kept out. Law enforcement entities make their own photos and recordings of these sites, but those are closely held and sometimes protected by law. Even if graphic photos become available — and that’s rare to nonexistent — news outlets are reluctant to publish them, due to concerns about privacy, propriety, and criticism from readers.

One of the few graphic photos that has been circulated is from Columbine in 1999, when a photographer from the Rocky Mountain News flew in a helicopter over the school on the day of the shooting and took a photo of a student’s body on the ground outside, not far from a police officer and several students sheltering behind a car. While the newspaper’s pictures earned a Pulitzer Prize, the reaction was mixed locally. “Hostility against the press got so bad that we had people throwing snowballs with rocks in them at our photographers,” noted John Temple, the paper’s editor at the time. Imagine what would happen today if an equivalent photo were published from Uvalde: The bad-faith brigade would find a hundred ways to distract us from an honest discussion about what it conveys. During the Columbine High School massacre, an aerial view shows a student’s body laying on a walkway while students and police officers shield themselves behind a car in Littleton Co., on April 20, 1999.

But let’s remember that government and public hostility to graphic photos extends far beyond our schools, to battlefields thousands of miles away. Particularly since 9/11, the U.S. military has maintained strict prohibitions on journalists taking pictures of injured or dead soldiers in Iraq, Afghanistan, and other combat zones. In recent years, the military has found the most efficient solution of all: It all but forbids journalists from embedding in combat operations. Even photography of military caskets was out of bounds for a long while. The Pentagon has an ever-growing cache of footage of people being killed in U.S. bombing attacks, but it’s only in exceptional circumstances, like the furor over the drone killing of an extended family in Kabul, Afghanistan, in 2021, that we see any of it.

The economy of war zone photos is not controlled by the military alone. News organizations have proved reluctant to publish pictures of dead soldiers. In 2008, freelance photographer Zoriah Miller was expelled from his military embed in Iraq after posting on his blog a photo of a dead U.S. soldier. Even after that, no major publication was interested in his rare picture. The New York Times did eventually publish it, but for a story about military censorship. One of the most haunting photos from the Gulf War, showing the corpse of an Iraqi soldier burned alive, was not distributed by any major outlet. “If we’re big enough to fight a war, we should be big enough to look at it,” said Kenneth Jarecke, the photographer.

The essence of America — its raw capitalism — is at least partly to blame. What would the readers and advertisers think? More than a million people have died of Covid in the U.S., yet there have been precious few images of these people as they perished in hospitals. I spent a good deal of time last year investigating why we were seeing so many pictures of doctors and nurses but almost none of the people whose lives were lost. One of the principal reasons was that hospitals were concerned about legal liability and the damage that images of death and chaos could do to their brands. “There was no benefit to them showing the apocalypse and what it looked like,” said Dr. Craig Spencer, director of global health in emergency medicine at Columbia University Irving Medical Center. “Having patients all over the emergency department on oxygen canisters and people intubated is not going to be a good image for your hospital.”

I think the familiar debate about whether to publish graphic photos of school shootings — or Covid victims or war casualties — has lost its urgency. Like so much else, it has become a ritual that we dutifully enact after another outrage occurs. I think the answer to the debate is clear — yes, publish the photos, it’s the right thing to do, we should be aware of what our plagues of violence beget. I also think it’s now more likely that if news outlets get possession of the right photo from Uvalde or from the next school shooting (we won’t have to wait long, this is America), they will publish it. But it will be from a position of desperation. They have tried everything else to change minds; this is all that’s left.

The truth is, it no longer matters so much. It’s not just, as the critic Susie Linfield wrote the other day, that photos rarely result in the kind of change that their supporters hope for. What’s different now is that on the life-or-death issues that confront us — shootings, wars, Covid, opioids, traffic violence — the awfulness of what has been allowed to accumulate over the decades is so damn vast. How can those responsible begin to backtrack? We’re not talking about a modest correction. America without its violence — without the factions that don’t mind the violence and even draw some benefit from it — would be a new country. There’s a path to getting there, but it’s going to require work and discomfort that’s far more complicated than publishing a shocking photo.