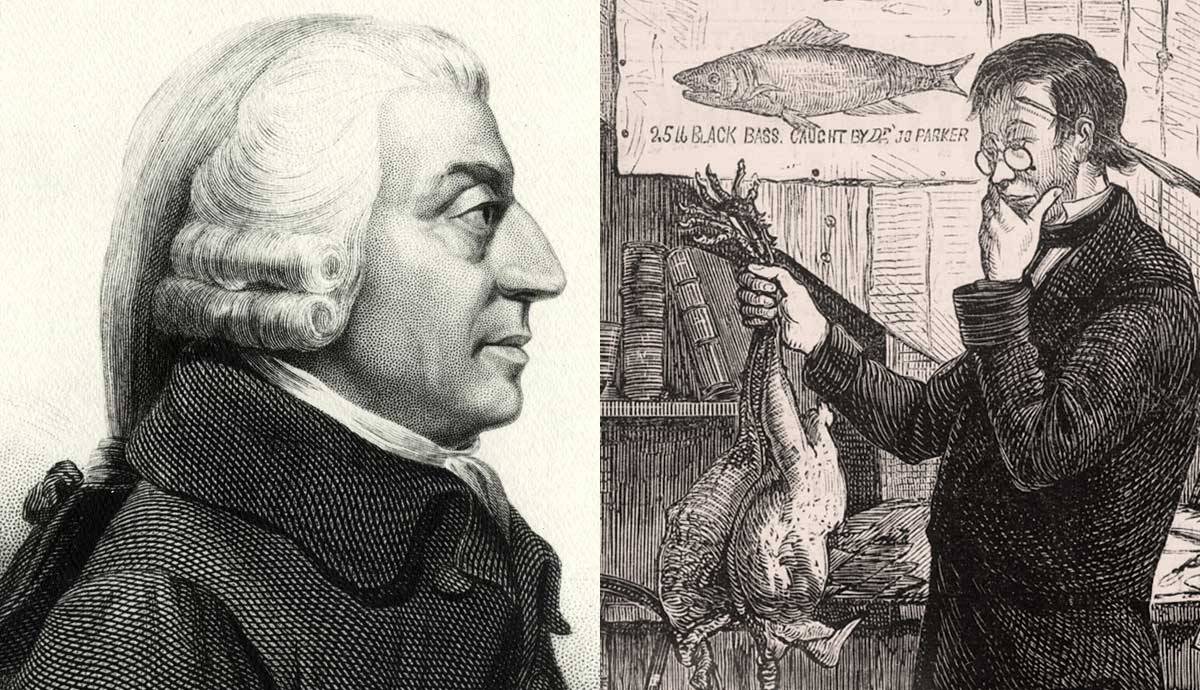 Adam Smith is best-known as the father of economics, and his epochal work An Inquiry Into the Nature and Causes of The Wealth of Nations (simply The Wealth of Nations henceforth) is universally regarded as a classic text both of economic theory and of political theory. The distinction between studying economics and studying politics is a thin one at best, as illustrated by the existence of disciplines like ‘political economy’ which explicitly tackle issues of politics and economics at once.

For Adam Smith, reflections on the topics which came to be seen as under the purview of economics – money, debt, transactions, labour – have substantial implications for politics. But, as we will see, the theoretical approach to politics presented in The Wealth of Nations is also derived from Smith’s approach to ethics, which he set out in the previously published The Theory of Moral Sentiments, which is a substantial and intriguing work of philosophy in its own right.

Adam Smith: What is a Theory of Politics?

For philosophers, however, the study of politics tends to be inflected with a ‘theoretical’ bent, which tends to include a certain amount of prescriptive content, as opposed to (say) the more descriptive and empirical leanings of ‘political scientists’. One way of understanding the difference between the prescriptive and descriptive approaches is to follow the famous ‘is/ought’ distinction David Hume proposes; that is, between describing how the world ‘is’, and how the world ‘ought to be’.

This distinction is far less clear in practice than it sounds at first. Adam Smith himself describes The Wealth of Nations as an ‘inquiry’ into the ‘causes’ of wealth – that is, why some countries come to be rich, why some countries come to be poor, and how. It should be apparent from the outset that converting our understanding of how wealth emerges into an understanding of how we should organise political institutions might not be straightforward.

What was Adam Smith’s theory of politics? Smith advocated a form of libertarianism where the ‘rule of law’ was significant, but extended only to the rigorous protection of private property and a few regulations on banks and lending. Further state interference in the free behaviour of individuals was both in itself unjustified and liable to cause unintended, negative side effects because states aren’t competent enough to interfere in order to alter society in an effective way. For Smith, the state should be a passive instrument, occasionally intervening to prevent egregious violations of morality but not a major force in the construction of society.

Adam Smith’s libertarianism was, it should be noted, quite different from that of contemporary libertarians. Smith isn’t neutral about the kind of life it would be good for us to lead, and he doesn’t believe that we owe one another nothing more than good faith interactions in the context of the free market. In assessing Smith’s political theory, it is important to keep in mind that Smith’s conception of politics was downstream of further beliefs he held. In particular, beliefs about the nature of morality and the nature of economics. Understanding Smith’s political theory means understanding these aspects of his thought.

The Theory of Moral Sentiments

First, Adam Smith’s moral theory – as set out in The Theory of Moral Sentiments – is a kind of Aristotelian or virtue ethical approach, with a large methodological emphasis on moral particularism. What that means in practice is that Smith took moral rules to be inadequate for conveying what is important, ethically speaking. Smith’s work in Theory of Moral Sentiments remains controversial because of its unusual structure, constituting a series of psychological portraits – what Smith calls ‘illustrations’ of the working of moral sentiments.

As the title suggests, Smith’s emphasis is on the sentiments involved in our ethical lives above all else, and so he offers a virtue ethical approach: it is the individual’s dispositions rather than any external rules or consequences that determine whether one is or is not acting morally. And, Smith suggests, what moral rules we could form from these are particularist in that they are “founded upon experience of what, in particular instances, our moral faculties, our natural sense of merit and propriety, approve, or disapprove of”.

What was Adam Smith’s approach to economics? First of all, Adam Smith approached economics in a systematic way, and more specifically in a systematic way which assumed that ‘the economy’ should be the object of scientific study. The reason why he is so often considered the father of economics has everything to do with the conviction held by many modern day economists that what they are doing has much more in common with the work of natural scientists (physicists, chemists and so on) than it does with those working in the self-described humanities (history, for instance). Whether economists are in fact doing what we might call ‘hard science’ is up for debate, and what that debate often hinges on is whether the conception of human nature held by Adam Smith holds up.

A Theory of Human Nature

The most important move Adam Smith makes in this direction is the description of a distinct theory of human nature, which put economic activity as its centre. He argues that human beings have an innate ‘propensity to truck, barter and exchange’. He argues that this is a tendency which separates human beings from all other animals, borrowing an analogy from several earlier writers – in particular Persian writers of the late mediaeval period – in observing that no one has ever seen two dogs exchanging their bones freely.

Smith bolsters this observation with a certain origin story of money and markets, which suggests that both are a natural solution to the problems with ‘primitive’ economies, which are based on barter alone and therefore require a ‘double coincidence of wants’ for a transaction to take place. If our only option is barter, If I want your shoes, I better hope you want my potatoes. If you want my potatoes, you better hope I want your shoes. Markets and money are a way of making transactions easier.

Adam Smith took the indigenous people discovered in the New World as instances of ‘primitive’ societies. Besides the fact that we now know he was wrong to suppose that many indigenous societies had never undergone significant social reorganisations, period of urbanisation and de-urbanisation, he was also wrong to suppose that ‘barter’ – or anything like it – was at the root of social and economic relationships in these societies. Indeed, it is highly doubtful that anything like a ‘barter’ economy has ever existed in the way Smith describes. Though it’s difficult to gauge how much information Smith actually had about indigenous peoples (the social sciences more generally were at a relatively infantile stage in their development), it’s quite difficult to acquit Smith of some seriously wishful thinking.

Given how many of Smith’s assumptions about human nature came to underpin the science of economics, this might well pose a problem for economists and economics. Does it pose an issue for Adam Smith’s theory of politics? Perhaps not. Adam Smith was, as something of a forerunner of the tradition of British liberalism which was to follow, an idealist in the context of social and political matters. He couldn’t have held his conception of human nature as one of exchange rather than, say, violence and conquest held everywhere at all times.

Adam Smith on the State

Adam Smith was at pains to point out that one of the major obstacles to mutually beneficial free exchange is the intervention of states or feudal rulers, which to Adam Smith were not strictly distinguished from one another. Nonetheless, the fact that his conception of human nature – even if it is an ideal one – seems so far from the way human beings actually behave does seem to undermine the political system and reforms Smith proposed. Indeed, there are ways in which his theory of human nature is incoherent which, in turn, makes Smith’s theory of politics incoherent as well.

For instance, Smith’s claim that the natural propensity of human beings to truck, barter and trade naturally leads to the creation of markets and money, which is only ever thwarted by states or state-like entities (such as feudal rulers) – runs against what we now know about the creation of money and markets. In fact, state power of a minimal kind is itself a necessary condition for the creation of money, and if human beings are self-interested in the way which Smith describes – always plotting to get the best possible deal for themselves – state-power is an absolute necessity for the creation of markets as well. After all, often going to a market and trading won’t be the easiest way to get the best possible goods at the lowest possible cost. Theft is often far more effective as a way of pursuing one’s interests.

Adam Smith was one of the foremost political, ethical and economic thinkers of his time. The way in which these theories relate to one another – with his political theory borne on by his approach to ethics and economics – can be seen as something of a precursor to modern, wide-ranging conceptions of politics. From that of Karl Marx to that of John Rawls to that of Michel Foucault, modern approaches to politics seek to integrate insights from various contributions to our understanding of value (that of ethics, and increasingly that of aesthetics) with insight from various empirical approaches to our understanding of society (economics, sociology, anthropology, psychology and so forth). Adam Smith’s work in sum offers more than a political theory. It offers a holistic approach to the political realm, approached with a range of tools and perspectives. It is an approach to politics which remains extremely influential today.