Dominating Jerusalem's skyline, the al-Aqsa mosque is the jewel in the crown of the historic Old City.

Holding a rich history for Muslims, Jews, and Christians alike, its beauty is both physical and transcendental to the thousands of worshippers who visit every year.

'The Dome of the Rock continues to define Jerusalem aesthetically'

Covering 144,000 square metres, the complex includes the golden-topped Dome of the Rock - arguably Jerusalem's most recognisable landmark - and the ancient al-Qibli Mosque.

The mosque complex serves several functions: a house of worship, a community space, and a centre of culture and history.

But as Israeli incursions and restrictions on worshippers continue to rise in frequency and intensity, many Palestinians fear they will soon lose their sanctuary.

It is considered sacred to all three Abrahamic faiths, and one of the holiest sites in Islam along with the Kaabah in Mecca and Prophet Muhammad's mosque in Medina.

Muslims also believe that it is the site where the Prophet Muhammad led his fellow prophets in prayer following a miraculous night journey from Mecca to Jerusalem, known as Isra-wal-Miraj, and then ascended to the heavens to speak with God.

This site is what later became known as the Dome of the Rock.

"The Dome of the Rock continues to define Jerusalem aesthetically," Mustafa Abu Sway, a professor at Al-Quds University and a member of the Islamic Waqf Council, told Middle East Eye.

The Dome of the Rock throughout history

Since it was built, the Dome of the Rock has come under various rulers and faced numerous transformations.

The mosque was reconstructed under the Umayyad dynasty between 688 and 691AD, and renovated several times under the Abbasids and Fatimids.

Any trace of the Crusaders were removed from the Dome of the Rock and it was heavily renovated under the Ayyubids, who added wooden frames surrounding the Holy Rock of Ascension and fortified the buildings’ walls.

Due to the building’s importance, the Mamluks paid particular attention to restoring the mosque,  especially the mosaics. Likewise, the Ottomans brought in mosaics made in Istanbul, assembling them in the mosque as well as opening new windows.

Other significant renovations came under the Hashemites, who coated the dome with gold-coloured aluminium sheets and had the Islamic typography restored.

It's the oldest surviving work of Islamic architecture in the world. The initial structure was built in the seventh century CE on the orders of Abd al-Malik ibn Marwan, the fifth caliph of the Ummayad dynasty.

At the southern end of the complex is al-Qibli Mosque, which is a focus for group prayer. It was originally built by Islam's second caliph, Omar ibn al-Khattab, following the Muslim conquest of the Levant.

It went through a series of renovations and expansions throughout history, including by the Ummayad dynasty, the Abbasids, and later by the Ottoman Empire.

On the southwest side of the mosque's ancient walls is the Western Wall, which Jews believe is the only surviving remnant of the second temple following its destruction by the Romans.

Israel stamping its mark on al-Aqsa

In 1948, after Israel declared itself a state and captured 85 percent of Jerusalem, the eastern section, including the Old City, fell under the custodianship of Jordan's Hashemite Kingdom.

Then, following the 1967 Middle East war, referred to by Palestinians as the Naksa, or "setback", Israel annexed both East Jerusalem and the area surrounding the al-Aqsa mosque. Jordan and Israel came to an agreement that Amman would continue to maintain the inside of the site, while Israel would control the outside.

Since then, Israeli settlers have steadily grown in their incursions into the mosque, often flanked by heavily-armed Israeli forces. 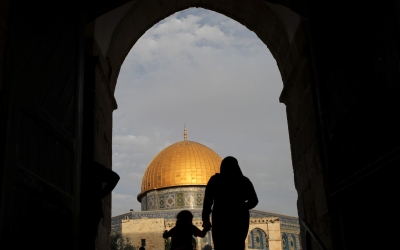 Al-Aqsa Mosque: The significance of one of Islam's holiest sites

After the occupation of 1967, Israel tightened its control over the Palestinian population, with al-Aqsa emerging as a symbol of Palestinian resistance.

The mosque played a central role in the first Palestinian Intifada, in 1988, when Israeli forces attacked Muslim worshippers who were in the courtyard outside the Dome of the Rock, using teargas and rubber-coated steel bullets, causing many injuries.

Then in September 2000, Israeli opposition leader Ariel Sharon toured al-Aqsa, surrounded by hundreds of heavily armed Israeli forces. His visit inflamed tensions and is widely seen as one of the key factors that sparked the Second Intifada, which lasted for five years and left around 3,000 Palestinians and 1,000 Israelis dead.

The status of al-Aqsa Mosque changed dramatically at that moment and since then the number of Palestinians from the occupied West Bank and the Gaza Strip that are allowed to enter the mosque has been restricted by Israeli authorities. Those who are allowed in have to go through a series of checkpoints.

Meanwhile, Israeli settlers have been granted more opportunities to enter the mosque, even recently gaining permission to enter during Muslim holidays.

The atmosphere often becomes particularly tense during the Muslim holy month of Ramadan when Israeli authorities sometimes ban Palestinian worshippers who want to pray at the site, or when members of the Israeli Knesset tour the area.

Protecting al-Aqsa 'is a religious and national duty'

By allowing Israeli settlers to worship at the al-Aqsa Mosque, some Palestinians fear they could face the same fate as those at Ibrahimi Mosque in Hebron, where in 1994 an armed Israeli-American settler killed 29 Palestinian Muslim worshippers during dawn prayer.

The site has already witnessed mounting violence from Israeli forces over the past few years.

Who are the guardians of al-Aqsa?

Al-Aqsa is administered by the Islamic Waqf, a Palestinian civilian administration that manages the site. Although Jewish Israelis are allowed to visit the compound, they can’t pray in it.

However, in recent years, some right-wing Israelis have challenged the rules, seeking, sometimes with force, to push the boundaries and pray on the site, causing invocations.

Known as the Mourabitoun and Mourabitat, Arabic for the steadfast or defender, this group comprised of men and women, aged anywhere between their 20s to their late 70s, are tasked with protecting and preserving the holy site.

The self-appointed guardians aim to protect the site from Israeli incursions and abuse from settlers. They keep their eyes peeled for far-right attackers, and Israelis who tour around the complex, as well as those who instigate confrontations with worshippers at the complex.

When they see settlers or Israelis coming onto the site, the mourabitoun will congregate and make their presence clear.

Their intitative stems from their belief that the status-quo at al-Aqsa is threatened.When they see settlers coming on to the site, they will call out loudly, gathering others and preventing them from staying on the premises.

The mourabitat are sometimes detained and arrested by security forces, with some facing interrogations and expulsions from the mosque.

In May 2021, during Ramadan, Israeli security forces raided the mosque and attacked worshippers. This attack left hundreds injured and triggered a war between Israel and Palestinians in Gaza that saw an Israeli bombardment of the besieged strip that killed more than 250 Palestinians.

Earlier this year, again during Ramadan, Israeli forces conducted multiple raids on al-Aqsa, using force to clear out worshippers to make way for Israeli settlers who wanted to enter the site for the Jewish Passover commemoration.

To this day, protecting al-Aqsa Mosque is seen by Palestinians as a national duty, while Israel's increased presence there is seen as an attempt to claim state and religious ownership over the site - while erasing Palestinians' own history and culture at the same time.