Submitted by Carol A. Clark 5-6 minutes 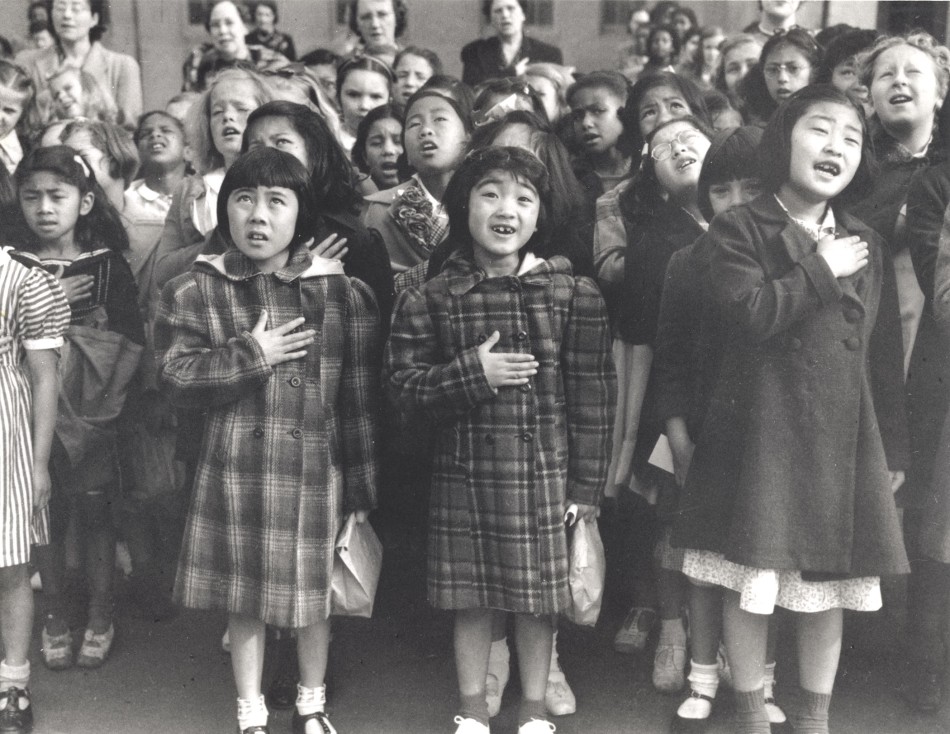 Pledging allegiance to the flag in 1942 at Raphael Weill Public School in San Francisco. Photo/Dorothea Lange, Courtesy of National Archives

The exhibition examines the complicated history and impact of Executive Order 9066 that led to the incarceration of Japanese Americans following the attack on Pearl Harbor. It will be on view in the museum’s Herzstein Gallery through Dec. 31.

Righting a Wrong embraces themes that are as relevant today as they were 75 years ago, looking at immigration, prejudice, civil rights, heroism, and what it means to be an American. The exhibition explores this complex history through historical images, personal stories, and objects from those incarcerated at the camps. A duffle bag used by the Imada family when they were relocated to the Gila River camp in Arizona reflects the restrictions to bring only what they could carry. Takeo Shirasawa’s 1943 high school diploma from the Poston camp in Arizona exemplifies the experience of thousands of other teens who had to complete their high school education in camps.

“Righting a Wrong is a lens into New Mexico’s relationship with this history,” Cathy Notarnicola said, New Mexico History Museum curator. “Our state housed four incarceration camps in Lordsburg, Fort Stanton, Santa Fe, and Baca Camp, and at the Santa Fe internment camp alone, 4,500 Japanese American men were incarcerated from 1942 to 1946. Therefore, New Mexico undoubtedly played a critical role in this history. Hopefully, visitors to the exhibition will gain a greater understanding of the complex issues that led to the incarceration of 75,000 Japanese Americans and 45,000 Japanese Nationals during WWII.”

Following the attack on Pearl Harbor by Japan Dec. 7, 1941, President Franklin Roosevelt signed Executive Order 9066 which sent 75,000 Americans of Japanese ancestry and 45,000 Japanese nationals to incarceration camps. Ten large, barbed wire-enclosed incarceration camps and dozens of other installations were scattered west of the Mississippi, far from their homes from March 1942 to March 1946. Young and old lived crowded together in the hastily built camps, endured poor living conditions, and were under the constant watch of military guards for two and a half years. Meanwhile, brave Japanese American men risked their lives fighting for the United States.

Righting a Wrong opens Sunday, Oct. 23, alongside a reception with light refreshments provided by the Women’s Board of the Museum of New Mexico.

About the New Mexico History Museum

The New Mexico History Museum is a statewide educational resource, local landmark, and destination for anyone who wants to understand the diverse experiences of the people of New Mexico, the dynamics that have shaped the state, and the relationships that connect this region with the rest of the world. Located on the historic Santa Fe Plaza, the New Mexico History Museum campus includes the Palace of the Governors, the Pete V. Domenici Building, the Fray Angélico Chávez History Library, and the Palace of the Governors Photo Archives. Learn more at nmhistorymuseum.org.

Righting a Wrong was developed by the National Museum of American History and adapted for travel by the Smithsonian Institution Traveling Exhibition Service (SITES). The national tour received Federal support from the Asian Pacific American Initiatives Pool, administered by the Smithsonian Asian Pacific American Center, the Terasaki Family Foundation, and C. L. Ehn & Ginger Lew. The travelling exhibition is based on an exhibition of the same name presented at the National Museum of American History from Feb. 17, 2017 through March 6, 2019 in Washington, D.C.

SITES has been sharing the wealth of Smithsonian collections and research programs with millions of people outside Washington, D.C., for more than 70 years. SITES connects Americans to their shared cultural heritage through a wide range of exhibitions about art, science, and history, which are shown wherever people live, work and play.  For exhibition description and tour schedules, visit sites.si.edu.