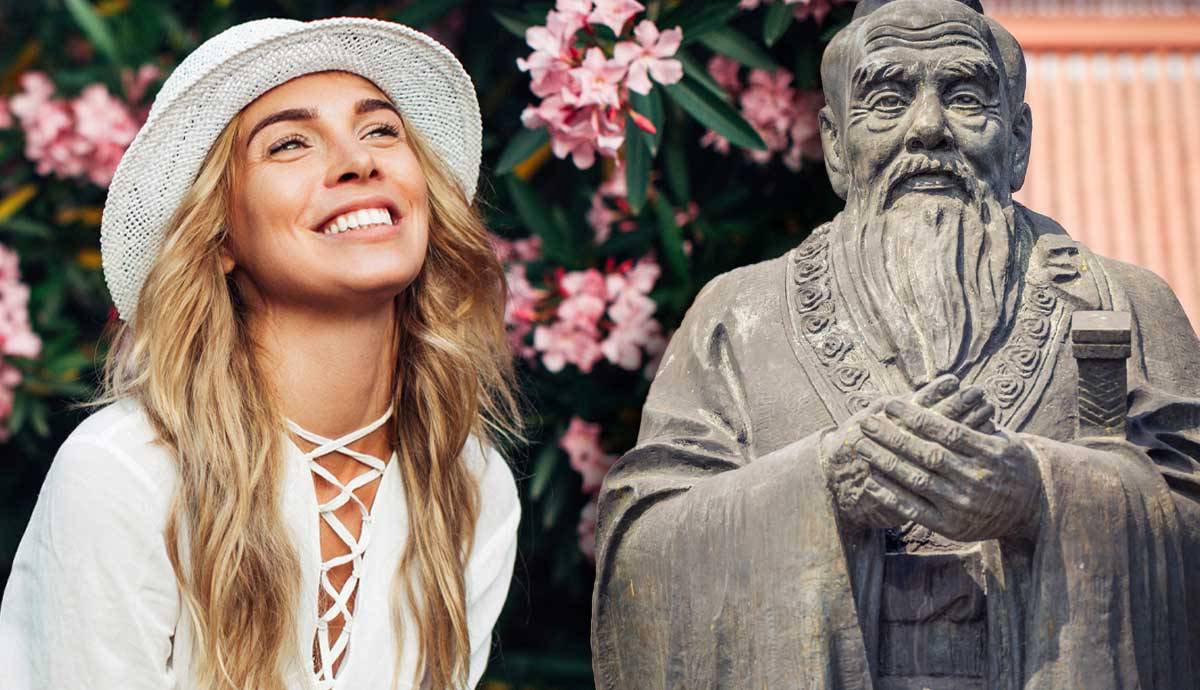 Happiness is universally considered to be a positive emotion. Or is it a state of being? A set of actions? We all feel that we know what happiness is, since most of us have hopefully experienced it at some point in our lives. But trying to define happiness in simple terms can be extremely difficult. In the list below, we take a look at four famous schools of philosophy and their thoughts on happiness. Some prioritize the pursuit of happiness as our main purpose in life, while others believe we need to limit how we approach achieving such a state of being.

1. Happiness According to Stoicism

Stoicism has become extremely popular in the last decade, particularly as a kind of ‘self-help’ philosophy. Many of its philosophers often deal with questions of happiness, and their path to achieving eudaemonia (an ancient Greek term that roughly translates to “happiness”) has much in common with 21st century mindfulness movements. So how does Stoicism define happiness?

A happy life according to the Stoics is one that cultivates virtue and being rational. If we can practice both of these things, they will work together to produce an ideal mental state that will lead to true happiness. Therefore, happiness is a way of being in the world that prioritizes practicing virtue and rationality. But how do we do this when there are so many things around us that can provoke strong, negative emotions such as fear and anxiety?

Stoics recognized that the world is full of things that cause us sorrow. Living in poverty, being physically harmed, or losing a loved one are all potential causes of unhappiness. Epictetus points out that some of these things are within our control and some are not. He argues that a lot of human unhappiness is caused by worrying about things we can’t control.

The solution? As Epictetus puts it: “Don’t demand that things happen as you wish, but wish that they happen as they do happen, and you will go on well.” We have to learn what is and isn’t in our power to control, otherwise we will spend our days pointlessly worrying about things that we can never change.

Another thing we can do is change our preconceived judgements about things that happen in the world. What we consider to be ‘bad’ might be neutral or even good to someone else. If we recognize this and understand that our judgments about things are what make us feel happy or sad, then we can start to approach our response to events in a more measured way.

True happiness takes practice. Epictetus advises us to get out of the habit of expecting the world to give us what we want. Instead, we should learn to accept that things will “happen as they do happen” and it’s up to us to learn to respond without worrying about what we can’t control. This is the path to eudaemonia.

2. Happiness According to Confucianism

The classic Confucian description of happiness is neither a simple feeling of pleasure nor a sense of wellbeing. Instead, it merges both of these things. As Shirong Luo puts it: “On the one hand, it [happiness] pertains to a feeling (of joy) while on the other hand, it is an ethical response to how one is living one’s life.”

The second part of this description, which refers to our ethical response to living, is characterized in two different ways. Achieving a state of happiness involves cultivating moral virtues, which Confucius believed was necessary to bringing happiness not just to oneself, but to other people as well.

Another ethical feature of achieving happiness is making the ‘right’ choices. In the context of Confucianism, as Luo and others point out, this means following ‘the Way’ (dao) of virtue. This is no easy feat. After all, the world is full of temptations that might lead us away from the path of virtue and towards a life of greed, lust and dishonorable behavior. But if we can learn to follow the Way and cultivate moral virtues, we will be well on the way to a life of happiness.

As hinted at above, such happiness is not just something that benefits an individual, but also the wider community as well. After all, respect for others is a key component of Confucianism in general: “Do not do unto others what you would not want others to do unto you.” When we live virtuously, our actions give happiness not just to the individual in question but also the benefactors of such actions.

3. Happiness According to Epicureanism

Epicurus often comes up when happiness is discussed. This is because his discussions of happiness in relation to pleasure often lead people to wrongly believe that he encouraged a hedonistic lifestyle. In fact, Epicurus believed that pleasure was the absence of physical and mental pain, which is very different to actively pursuing pleasurable things like eating rich foods and drinking wine!

Epicurus, like Aristotle, believed that achieving happiness was the ultimate goal of life. Happiness is a form of pleasure all its own. It is a state in which we experience a total absence of physical or mental pain. Therefore, Epicurus often prioritizes cultivating ataraxia or a state of total tranquility, free from anxiety in any form (alongside a lack of any negative physical sensations).

Alongside happiness, Epicurus also identifies khara (joy) as an absence of pain, rather than the active pursuit of activities we might traditionally consider joyful (feasting, sex etc.). Epicurus did not believe in indulging oneself in such pursuits: he argued that they actually encourage mental agitation rather than decreasing it to the point of absence.

Within Epicureanism then, happiness is a particular kind of pleasurable state that prioritizes physical and mental well-being. It is a state of being that rejects agitation and consternation of any kind, favoring tranquility instead. Little wonder then that later philosophers such as Cicero interpreted Epicurean happiness as a neutral state, bringing an individual neither pain nor pleasure in the traditional sense.

4. Happiness According to Kant

According to Ana Marta González, Kant defines happiness as “a necessary end, derived from human beings’ condition as rational, finite beings.” Obtaining happiness is one factor that may contribute to our decision-making processes and the degree to which we pursue moral behavior.

The nature of happiness is such that it’s normal for any moral being to want to try and obtain it. However, a Kantian moral being will be able to restrict his or her behavior to acting in a way that also complies with morality. Happiness refers to “the natural appetite that must be limited by and subordinate to morality.”

Kant relates happiness to our natural selves and how we might fulfill natural wants and needs. Happiness is something we know how to achieve instinctually, whether it be engaging in certain sexual practices or fulfilling certain pleasurable activities. However, Kant refuses to accept that happiness is the ultimate goal of humanity. If this were the case, then we would be able to engage in whatever makes us happy without consideration for morality, since often what makes some people happy is arguably deeply morally wrong (murder, stealing etc.).

Instead, we should seek to cultivate reason, and thus live according to moral law, in order to achieve Kant’s notion of the Highest Good. Here, morality is both a limit and condition of happiness.

5. Happiness According to Existentialism

It might come as a surprise to many that existentialism appears on this list. After all, existentialism is often portrayed as a nihilist philosophy. Well-known existentialist thinkers such as Jean-Paul Sartre emphasize the absurd nature of human existence, as well as the resulting angst and despair that emerges from this state of affairs.

However, some existential philosophers did address the concept of happiness. Albert Camus talks about the key to happiness in his essay “The Myth of Sisyphus”. In Greek mythology, Sisyphus was punished by Hades for cheating death. Sisyphus was condemned to forever roll a heavy rock to the top of a mountain, only for it to fall back down again.

We might assume that this horrible, futile punishment would break Sisyphus’ spirit and stop him from experiencing happiness. And the signs don’t look good at first glance – Camus uses this myth to illustrate the existentialist view of our own situation. As humans we have no external values to live up to, no external set of principles that give our lives meaning and allow us to gain a sense of satisfaction. Our actions and behaviors are ultimately meaningless, it seems. Just like rolling a rock up a mountain for all eternity.

But Camus says that we must imagine Sisyphus as a happy man. Because if we fully accept the circumstances above then it’s possible for us to find happiness within ourselves. We do this by finding value inside our own existence. Sisyphus is fully aware of his lot in life: he has plenty of time to reflect on the futile nature of his existence as he wanders back down the mountain and sees the rock rolling towards him once more. But he will always be free to create his own internal set of values that the gods cannot interfere with.

This is Camus’ key to happiness. First, we must accept that we will never find meaning in the outside world, then embrace the value we can find within ourselves. It’s possible for us to create our own principles and ideas, and to derive happiness from them. And what makes this version of happiness so powerful is that it can’t be interfered with by any kind of external force. Nothing and nobody can take it away from us.