Since women’s suffrage and the Civil Rights movement, the right to vote for all US citizens, regardless of sex, race, or class, has theoretically been protected, with one exception: people with felony convictions. Many of the publications in Reveal Digital’s American Prison Newspapers collection provide a unique perspective on the issue of felony disenfranchisement. In a 1993 article titled “The Black Political Voice” from the Prison Legal News, for instance, Dr. Gerald Fuller finds evidence that “the criminal justice system is being used as a means to limit black political franchise.” 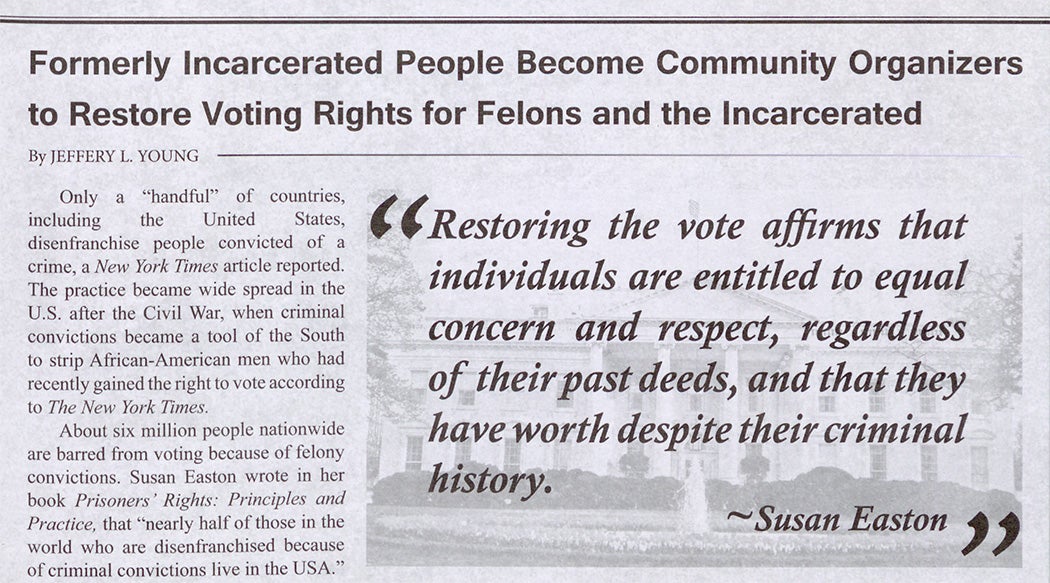 “About six million people nationwide are barred from voting because of felony convictions,” writes Jeffrey Young in The Prison Mirror. Formerly incarcerated people comprise the largest group of disenfranchised Americans. Writing from the Minnesota Correctional Facility at Stillwater, Young points out that of the 180 people who had been prosecuted for voting in the 20 years since the article’s 2018 publication, at least 100 of them were in Minnesota. Since then, prosecutions against people who voted despite being ineligible for their felony status have only increased.

“The United States is one of the strictest nations in the world in denying voting rights to convicted felons,” reports The Angolite. Women, people who do not own property, Black people, racial and ethnic minorities, and the poor were all once explicitly disenfranchised under American law. Scholars have studied disenfranchisement extensively, and broadly agree on its origins. As social progress brought the nation nearer to universal suffrage, the ferocity of the practice grew. “From the time when felonies as a class were first used to deny the franchise, an increasing number of offenses have been classified as felonies, countering the expansion of the right to vote with an opposite expansion in the denial of that right based upon a felony conviction,” explains Afi S. Johnson-Parris in the Virginia Law Review. Unable to deny people the right to vote based on their identity, what constitutes a felony was instead expanded and applied to more and more people.

People incarcerated in prison are denied the right to vote by every state except Maine and Vermont, even when their bodies are counted for the allotment of congresspeople, a practice NPR referred to as “prison gerrymandering.” Many other democracies across the globe allow their citizens to vote from prison, it should be noted. But physical incarceration only accounts for a minority of the disenfranchisement, with the majority stemming from laws that restrict the right to vote even after release.

The Angolite reported in 2018 that nearly 8% of the Black population is ineligible to vote, compared to 1.8% of the rest of the population. The racially disparate outcomes helped to spur advocacy movements nationwide, sometimes led by formerly incarcerated community organizers.

Many states have modified their laws to expand the right to vote in the past two decades. In the state of Florida—with one of the highest overall and most racially disparate rates of disenfranchisement—voters overwhelming passed Amendment 4 in 2018, to restore the right to vote for most people with felony convictions. The next year, Governor DeSantis signed a bill into law restricting re-enfranchisement to those who had paid off all their court fines, fees, and restitution. In August of 2022, that same governor’s election police arrested 20 people with felony convictions for voting, all of whom were under the impression they were newly eligible.

In some states, the loss of the right to vote is permanent. In others, it’s time-limited, conviction-dependent, or only while the person is on probation or parole. In yet others, the restoration of the right to vote must be formally requested, alternatively by the parole board, the governor’s office, or the President. Expungement laws vary substantially by state and conviction type.

Voter turnout for formerly incarcerated people remains low, with many people under the impression they are ineligible to vote. The ACLU of New Jersey ran an advertisement in the prison newspaper Perceptions in 2006, encouraging people releasing from prison to register and vote. People in jail for misdemeanors, civil infractions, or awaiting trial are all eligible to vote, right from jail, the advertisement points out.

Voter disenfranchisement will continue to be an oft-studied and oft-reported on issue as long as it exists. The Sentencing Project estimates that 4.6 million Americans are barred from voting in 2022, a number that has declined as voting rights have been expanded by states.

JSTOR is a digital library for scholars, researchers, and students. JSTOR Daily readers can access the original research behind our articles for free on JSTOR.